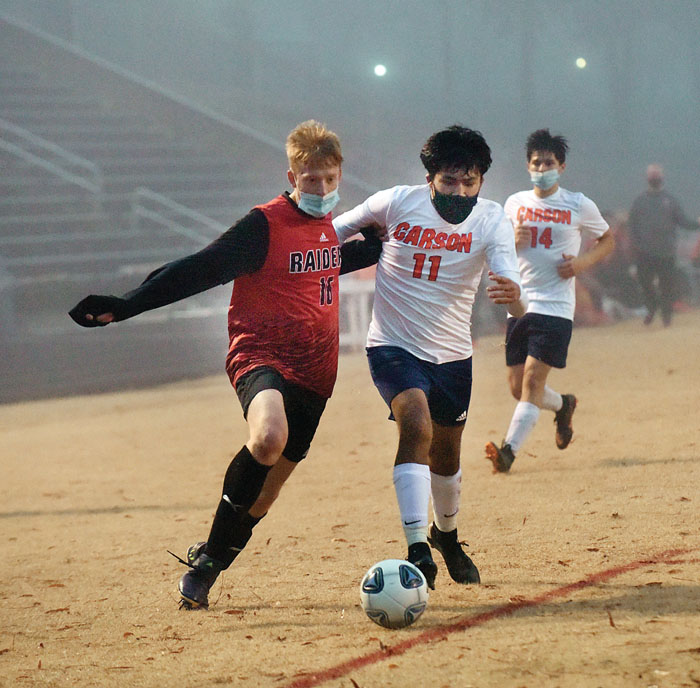 Carson’s Adrian Guerrero (11) battles a South Rowan player for the ball. Photo by Wayne Hinshaw, for the Salisbury Post

Third in a series of reports on Rowan soccer teams …

CHINA GROVE — Lauren West, head coach of Carson’s girls soccer program for the past six seasons, accepted the reins of the boys team during the summer months.

West played at North Rowan and was educated at Louisburg, Catawba and UNC Wilmington. Owner of a master’s degree in psychology, she’s a social studies teacher at Carson.

Psychology backgrounds are extra helpful these days, with students teachers and coaches dealing with unprecedented challenges.

It’s not summer now, for one thing. West wore thermal underwear, long johns, to handle practice in Thursday’s wintry conditions. That was a first for her.

“It was brutal,” West said.

But coaching boys isn’t new to West. She was an assistant coach during Carson’s recent glory days for boys soccer. In 2015, when they went 20-2 and won 17 of 18 in the South Piedmont Conference, the Cougars were a feared squad and finished the season ranked eighth in 3A.

Those Carson teams set the bar high, but the Cougars haven’t made it back to the playoffs since 2015, and now the program is virtually starting over.

There will be growing pains with a short roster in a short season. That was evident in a 4-0 opening night loss to rival South Rowan.

“The team we thought we could have this summer, we don’t have right now, due to different circumstances,” West said. “We lost a lot of players. We had 20 to 30 guys in July, but we’re down to a 13-man squad right now. Still, I’m very optimistic. We’ll grow as a team and grow as individuals.”

West’s preseason focus was on conditioning and individual skill development. Every team was limited as far as running normal drills with balls and close contact.

There are only four returning players.

Ricky Musselwhite, Michael Hollar and Cameron Yates are senior defenders. Gabriel Honeycutt, a sophomore who will be an attacking midfielder, has varsity experience.

West is hopeful that skilled midfielders Adrian Guerrero and Lisandro Cardona can score goals and create scoring chances for teammates.

“They see the field so well,” West said. “They’ll make plays. We’re going to lean on them.”

Sophomore Davin Garcia has the quickness to be a scoring threat.

“He can be an offensive weapon with his speed,” West said. “He’s learning to read balls, getting more consistent.”

Goalkeeping duties are expected to be handled by sophomore Brendan Lettice.

This is a very young team, with eight members of the sophomore class on the slim roster.

With new faces all over the place, any Carson success will depend on coming together and doing it quickly.

“The guys know they’re going to have to run for 40 minutes at a time, while wearing a mask, but no one is complaining,” West said. “We’re all facing some things we never expected to face, but this team has heart and it has talent, and we’re excited to be playing.”