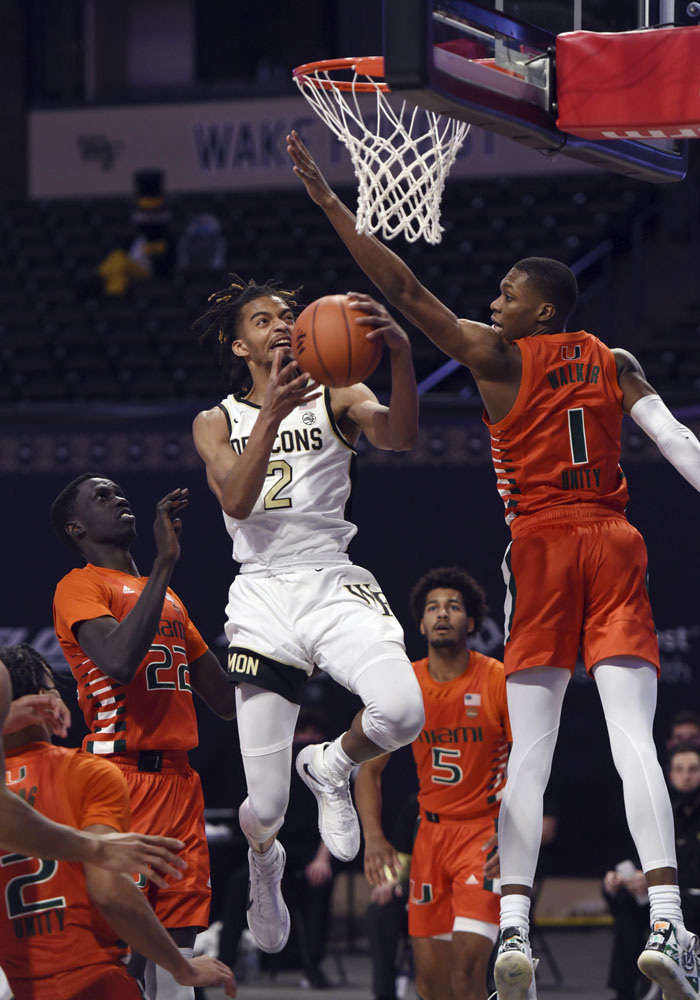 Wake Forest’s Jalen Johnson tries to get to the hoop as Miami’s Anthony Walker defends Saturday. Photo courtesy of ACC

Whitt, Williamson and Johnson each made three 3-pointers for Wake Forest, which kicked off Saturday’s game with a season-high nine treys in the first half.

Thirteen of the Deacons’ 23 field goals came from behind the arc.

Miami was down to seven players, each of whom saw at least 11 minutes of court time, and Wong departed in the closing minutes with an ankle injury.

Elijah Olaniyi and Earl Timberlake were out with shoulder injuries, Chris Lykes with an ankle injury. Rodney Miller Jr. and Sam Waardenburg are out for the season with knee and foot issues, respectively.

Coach Jim Larranaga said he didn’t yet know the severity of Wong’s injury, and still doesn’t know when Lykes — Miami’s leading scorer a year ago — might return after being sidelined for two months.

The Hurricanes are depleted by a departure as well. Freshman Matt Cross, who appeared in Miami’s first 14 games and started nine, left the program Thursday.

“I probably just was not the right coach for him,” Larranaga said. “I have my own way of doing things. You’ve got to buy into that approach. If you don’t, it probably makes you unhappy; you don’t feel like it’s an ideal fit. I just came to the conclusion the best thing would be for him to find someplace where he would be happier.”

Wake Forest lost seven of its first eight games in January, eking past Pitt 76-75 for its lone win before Saturday.

GREENVILLE (AP) — Brandon Rachal had 21 points and 10 rebounds as Tulsa got past East Carolina 77-68 on Saturday.

Jayden Gardner had 26 points and eight rebounds for the Pirates (7-6, 1-6), who have now lost five games in a row. Tremont Robinson-White added 15 points. J.J. Miles had 13 points and six assists.

Hunter McIntosh had 10 points for the Phoenix (3-4, 0-3), whose losing streak reached four games.

Silverio scored eight in a 12-2 run midway through the final period when Hofstra took the lead for good, and added a 3-pointer when the Pride reeled off a 9-0 run to pull away. Hofstra shot 57% for the game (31 of 54).

CHARLOTTE (AP) — Jahmir Young scored 22 points and Jordan Shepherd made a 3-pointer from the left corner with 1:24 left to give Charlotte the lead for good en route to victory over Florida International.

Eric Lovett had 17 points for the Panthers (8-10, 2-8), who have now lost seven games in a row. Cameron Corcoran added 11 points. Dimon Carrigan had nine points with eight rebounds.

Kam Woods had 12 points and six assists for Troy (8-9, 3-5 Sun Belt Conference), which earned its fifth consecutive home victory.  Justin Forrest had 15 points for the Mountaineers (12-7, 6-4). The Trojans beat the Mountaineers 71-62 on Friday.

Duke balance too much for Clemson in 79-53 win