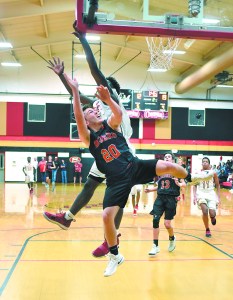 “Really a fun game to coach and be part of,” South head coach Daniel Blevins said.

Jackson Black scored a season-high 14 for the Raiders (3-4, 2-2), while Marcus Holloman had his second straight big Central Carolina Conference game with 13.

“We started off really struggling to put the ball in the basket from anywhere on the court,” Blevins said.  “But our defense kept us close by not allowing them to get many uncontested shots.”

In the second quarter, South started to find a rhythm offensively, made some shots and closed its deficit to five points at halftime.

“Then the second half was much better offensively for us, as we were getting key stops and turning them into points,” Blevins said.  “Once we got the lead, at the 3-minute mark, we did just enough to win the game from the foul line.”

The key to beating West Davidson (3-4, 1-4) is containing shooter Macon Stovall, who had scored as many as 37 points this season. Stovall got 21 on Friday.

“We knew he could really shoot the ball, and we had to know where he was,” Blevins said.

South moved up to fifth in the CCC standings and plays at Thomasville on Tuesday.