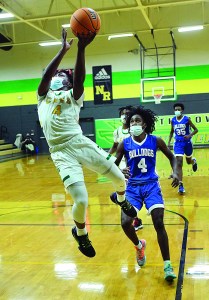 North’s Quashawn Carpenter had a career game on Friday against Albemarle with 27 points. Photo by Wayne Hinshaw, for the Salisbury Post 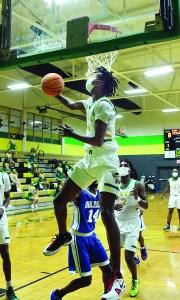 North’s Derrick Hanson works inside. Photo by Wayne Hinshaw, for the Salisbury Post 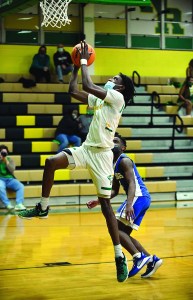 North’s Kendrell Goodes goes to the hoop. Photo by Wayne Hinshaw, for the Salisbury Post

SPENCER — North Rowan’s boys basketball team finally put it all together in the fourth quarter on Friday.

The Cavaliers used a 26-point fourth quarter to break open a close contest with Albemarle and thumped the Bulldogs 72-46.

Albemarle (1-3, 0-3) came off a COVID pause on Thursday and lost in overtime to rival North Stanly. That maximum effort may have played a role in the Bulldogs’ hitting the wall in the fourth quarter on Friday.

Quashawn Carpenter was the big story for North. The guard was expected to be the Cavaliers’ scoring leader, but he’s experienced an up-and-down season. He figured some things out against Albemarle, scoring a career-best 27 points. He got 19 in the second half and had 11 in the Cavaliers’ huge fourth quarter. He made three 3-pointers.

“He described his grandfather as his best friend, so Quashawn has been carrying a lot of weight,” Causby said. “This was a big release for him and for our team in general. I was happy he responded so well and that our team rallied around him.”

Amari McArthur scored 11, the third double-figure game for the sophomore. Kendrell Goodes, the team’s most experienced player, got seven of his nine points in the fourth quarter. Kendal Mitchell also scored nine and contributed to North’s fourth-quarter spree.

Albemarle got three 3-pointers and 19 points from MJ Raye, who did most of his damage in the first half.