High school basketball: Everyone has a hand in win by Salisbury girls 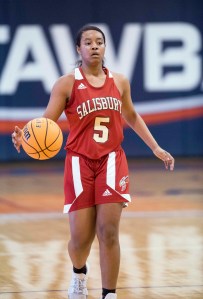 SALISBURY — Salisbury’s Jania Bolder, probably the least famous person on an 11-team roster, set a forceful screen at the 3-point line, and Rachel McCullough used it to drill another long one.

Bolder clapped her hands gleefully like she’d made the shot herself. Even with a mask on, it was easy to see McCullough smile.

Teamwork is a beautiful thing to watch. The Salisbury girls have it.

There were stretches on Friday when the Hornets looked like 2A state-championship material. They dismantled a good Oak Grove squad 69-41.

The Hornets made a determined effort to get their posts more involved in the second half. They responded.

“Assists are what I work on the most and enjoy the most,” said Bryant, a sophomore who surpassed 500 career points earlier in the week. “We made great passes tonight. We made some great basketball plays.”

Bryant had six assists and five steals to go with her 13 points.

A 3-pointer by Bryant and a tough three-point play by McCullough got Salisbury started. It was 22-4 early in the second quarter. Oak Grove looked like it had been hit by a tornado.

“Oak Grove is a good team, a very good team,” Bryant said. “They played us an overtime game in the conference tournament last year, and that’s what was on my mind tonight. We needed a fast start.We wanted to take care of them in the first four minutes.”

There were times when the Hornets carried the unselfishness theme a bit too far. Jamecia Huntley passed up a layup opportunity to kick the ball out to McCullough for a three-point attempt. The coaching staff would rather see Huntley, agile and springy, take it up strong when she gets the ball that low. She didn’t even look at the hoop in the first half, but she showed in the second half what she’s capable of doing. She finished with seven points, five rebounds and three assists.

Tall, mobile freshman Makayla Noble had some really impressive sequences in the fourth quarter, including a 3-pointer.

All the Hornets had their moments, whether it was a steal by quick-handed Natavia Taborn, a flying layup by Kimya Lynch, a charge taken byMary Morgan, a 3-pointer by Icesis Nwafor to close the third quarter, or a power layup in traffic by Jaleiah Gibson.

Gibson intitiated the highlight-tape play of the night when she made a steal and fired a a quick outlet pass to Bryant, moving down the right side. Bryant only had the ball in her hands for half of an instant because she was already rifling a crosscourt pass to a wide-open McCullough.

It’s one of the things they work on.

“We were prepared to play well,” McCullough said. “Everyone had a hand in this one.”

The last piece of the puzzle for the Hornets could be tall post player Haley Dalton, who is a terrific defender and rim protector. She hasn’t played yet after a late-summer AAU injury and is still wearing a boot, but she is optimistic about being in action in the playoffs.

High school basketball: Salisbury boys get it done with…