Duke balance too much for Clemson in 79-53 win 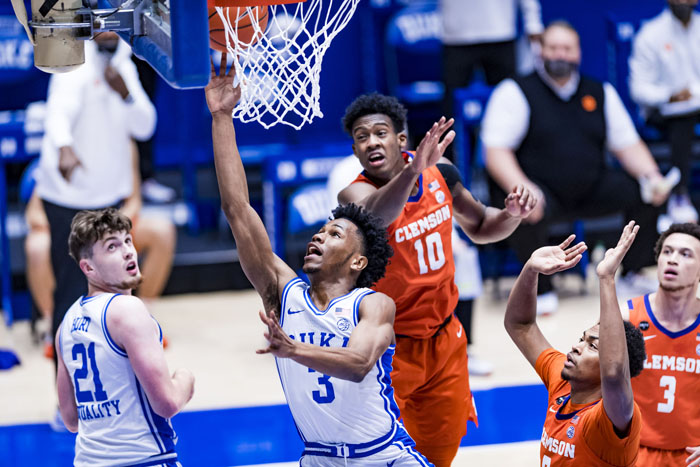 Duke’s Jeremy Roach gets to the basket as teammate Matthew Hurt looks on at left with a group of Clemson defenders Saturday. Photo courtesy of ACC

DURHAM (AP) — Matthew Hurt led a balanced attack with 13 points and Duke played like a team on a mission, rolling to a 79-53 win over Clemson on Saturday.

A week earlier Duke lost to Louisville, running the Blue Devils’ losing streak to three as they tumbled out of the Top 25 for the first time in almost five years before a win over Georgia Tech on Tuesday. Meanwhile, the Tigers, who have been inconsistent since coming off a COVID break, were coming off a 54-50 win over Louisville on Wednesday.

But the Blue Devils almost hit 50 points by halftime against a team giving up just 62 a game and Clemson didn’t get there until just over three minutes remained, then didn’t hit another shot.
Duke had a 17-5 lead midway through the first half and stretch it to 41-22 at the half, rattling Clemson into 30% shooting and eight turnovers that were turned into 14 points.

The Blue Devils then opened up the second half with an 11-0 run with Steward, Hurt and Moore drilling 3-pointers and Steward dunking for a 52-22 lead. the margin reach 35 points with just under 11 minutes to play.

The Tigers finished with just enough of a rush to avoid their lowest offensive performance of the year.

Duke is at Miami on Monday and Clemson is home against North Carolina on Tuesday.

High school basketball: Everyone has a hand in win…