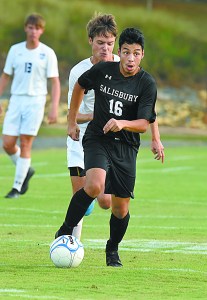 Salisbury’s Christopher Portillo had two assists in the Hornets’ opener.Photo by Wayne Hinshaw, for the Salisbury Post.

From staff reports
After two cancellations, Salisbury’s boys soccer team played Thursday on (Monroe) CATA’s turf field.
Salisbury won 2-1.
Salisbury got on the board first with Christopher Portillo finding Will Webb on a through ball.  Webb beat CATA’s charging keeper to put it in the back of the net.
CATA leveled the match 13 minutes later by converting a penalty kick.
Salisbury got the decisive goal 17 minutes into the second half after Portillo found Webb again, this time on a diagonal ball. Webb beat his defender and slotted a ball back post to complete the scoring.
Salisbury got excellent play from Freshmen Yahir Aviles and Carlos Rodriguez and juniors Brayan Aviles and Bennett Clark.
Wade Robins was stout in goal with 10 saves.
Next for the Hornets is a home game Wednesday against West Stanly at 6 p.m.
•••
West Rowan won 4-0 against South Rowan in a non-conference matchup on Thursday.
Carlos Romero scored two goals for the Falcons. Jonathan Hernandez and Luis Elizalde scored a goal each.
Salvador Bautista had two assists. John Allen Ferguson had an assist.
Jose Elizalde made seven saves for West (1-1).
West hosts East Rowan to start North Piedmont Conference play on Monday.
You Might Like