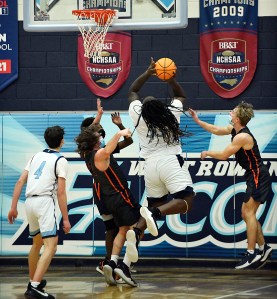 Point guard Jalen Moss got to the rim for 10 2s for his 20 points, while big man Zeek Biggers powered in nine more 2s for his 18. Biggers’ career high is 20.

It was just too much.  East had few answers in an 80-48 North Piedmont Conference setback.

AJ Mauldin supplied four 3-pointers for the Falcons. who also got double-digit scoring from Macari Allison (13) and Juke Harris (11).

Braden Graham entered the game as the county’s scoring leader, but was held to four points. West still enjoyed it standard offensive output and has put at least three men in double figures in every game.

East got 16 from David Jordan, his sixth game in double figures this season. Cam Padgett scored 12.

East stayed in it for a quarter, but the Falcons pushed their lead to 38-25 at halftime and settle things with a 21-8 edge in the third quarter.