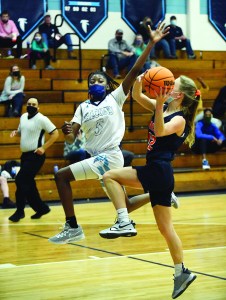 West’s De’Mya Phifer in the Carson game. Photo by Wayne Hinshaw, for the Salisbury Post

It still didn’t translate to a victory, mostly because freshman De’Mya Phifer scored her season-high 20 points for West Rowan in a 52-38 win against the Mustangs.

The young point guard has scored in double figures in every game, but this was her best one. She scored 10 when the Falcons beat East 58-36 early in the season in Mount Ulla.

East only dressed eight due to injuries.

“We’ve only had four practices and two games where all 11 were there and healthy,” East head coach Kevin Holland said. “It’s tough, but the girls stay after it.”

Freshman Emma Clarke had her fourth game in double figures for West with 10 points. Another freshman, Mya Edwards, scored eight.

“This is the first time that we’ve gotten down that we didn’t let the game get away from us,” Holland said. “The girls are working and getting better and I’m proud of that.”

“She’s passing the ball well and she’s not afraid to drive,” Holland said. “I believe all her points were in the paint out of our half-court offense.”