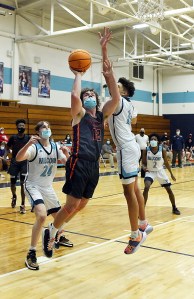 But that first half?

The Cougars dug a 43-12 hole at halftime at second-place North Iredell and took a 70-44 North Piedmont Conference loss.

On a positive note, it was major improvement over the Cougars’ 58-19 loss to North Iredell in China Grove in a game in which the Cougars were exhausted and short-handed.

Carson (1-7, 0-6) hasn’t won since it beat South Rowan on opening night. Dealing with a lot of adversity, the Cougars have only reached 50 point twice.

Meanwhile, North Iredell (6-1, 5-1) has lost only to West Rowan and figures to still be in title contention when it hosts the Falcons on Feb. 5.

Jackson Hawkins led the Raiders with 17 points. John Jackson had 15, while 6-foot-8 sophomore Beckham Tharpe had 12.

Carson plays at East Rowan Tuesday. Carson lost in overtime to the Mustangs in the first meeting.