Cooper working to help overcome hesitancy of some to vaccine 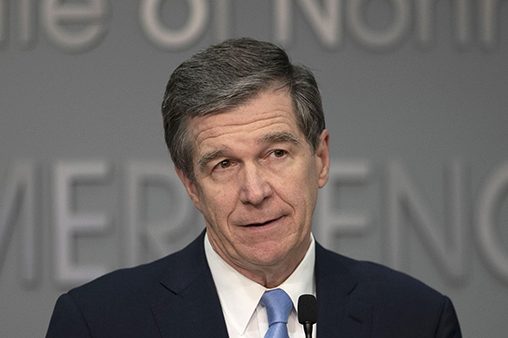 PITTSBORO — North Carolina Gov. Roy Cooper on Thursday visited Piedmont Health SeniorCare in Pittsboro to gather ideas about how to help overcome the reluctance of some to get the COVID-19 vaccine.

The federally qualified health center that administers doses with an emphasis on serving racial and ethnic minority groups said it first worked to overcome hesitancy within its own ranks through greater education.

“One of the first things that we had to do was to build confidence with our staff, said Misty Drake, the 43-year-old chief operating officer at Piedmont Health. “There was a lot of hesitation just with our frontline staff … We actually started with a town hall where it was a multidisciplinary group of team members that talked about the science.”

After gaining increased buy-in from staff, it became easier to boost participation in an underserved community.

“It’s easy for us because we’re already servicing marginalized communities and they trust us to be able to give them the right information that they need in order to make the best decision for themselves,” Drake told Cooper.

In a brief news conference with reporters after the conclusion of his tour, Cooper acknowledged the state needs to do more to replicate the success that the health center in Pittsboro has seen.

“We try to make sure that these vaccines are being distributed equitably, and we wanted to come and see that,” Cooper said. “A lot of it is established trust that these doctors and nurses and staff members have already established.”

Reginald Tyson, a 50-year-old pastor at Big Zion AME Zion Church in Oxford, spoke with Cooper during the tour. He believes hesitancy is driving the lack of vaccinations among Black people. Tyson got vaccinated last week and said he’s seen skepticism among relatives who want to see others vaccinated first to ensure it is safe.

“One of the things that they are saying is that their caution is due to the fact that they want to see the results or impacts of people who have already gotten it,” Tyson said. “I think here at Piedmont Health they’ve managed to spread the word pretty quickly.”

Cooper emphasized the state’s desire over the last week to clear its backlog of first doses through large vaccination clinics. One event  last weekend at Charlotte Motor Speedway got nearly 16,000 people vaccinated.

Asked by reporters how the state plans to overcome concerns about racial, ethnic and geographic inequity, Cooper replied, “The entire country has to do better on this.”

As many as 30,000 people could get vaccinated this weekend at Bank of America Stadium in Charlotte.

“We wanted to make certain that we got all of our first doses off the shelf, and the state had gotten a little behind on that, particularly when we were concerned that we might have our allocations cut, which would be bad for everybody across the board,” Cooper said. “We could not tolerate that.”

With the backlog mostly exhausted now, Cooper said the state will work harder to ensure vaccines are getting into the arms of people in minority communities.

“We need to really concentrate on the equity piece, which is one of the reasons why we are here today.”

Cooper and state Health and Human Services Secretary Mandy Cohen learned that a South African variant of the virus has hit its southern neighbor. They said they are acting as if the variant is already here.

“While we have not yet identified that variant here, just like with the U.K. variant, we’re operating as if it’s here already because we knew that this virus moves fast,” Cohen said.