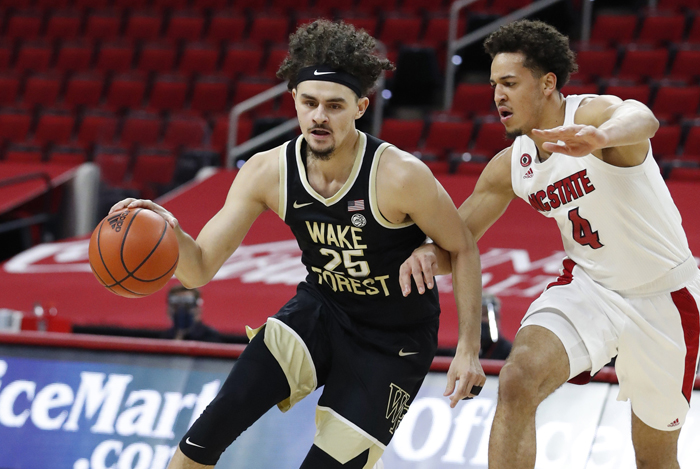 Daniels and Shakeel Moore made back-to-back 3s, and after Okpomo made a layup at the other end, Daniels hit two more 3-pointers in a 17-2 run that made it 25-14 midway through the first half and Wake Forest trailed the rest of the way.

Ismael Massoud hit a jumper with 7:09 left in the first half and the Demon Deacons missed their 12 field goal attempts before Isaiah Mucius made a layup 89 seconds into the second half.

Moore his a 3-pointer to give N.C. State its biggest lead of the game at 53-34 with 11 minutes to play but the Demon Deacons scored nine of the next 10 points and later used a 9-0 run to trim their deficit to 58-52 when Williamson hit a 3 with 3:30 remaining. They pulled within five three times in the closing minutes but got no closer.

Parham shot 5 for 7 from deep. He added six rebounds.

Mason Faulkner had 15 points and six rebounds for the Catamounts (7-8, 0-6), whose losing streak stretched to six games.

Central Florida dominated the first half and led 42-25 at the break. The Knights’ 42 first-half points marked a season best for the team.

Jayden Gardner had 23 points and 10 rebounds for the Pirates (7-5, 1-5), who have lost four consecutive games. Tremont Robinson-White added 18 points.