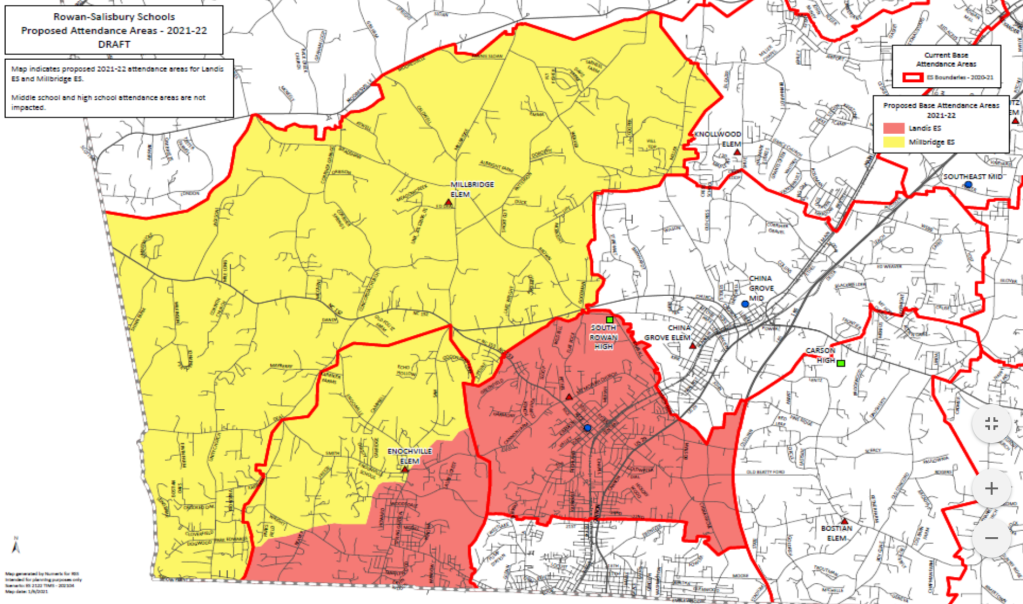 SALISBURY — Rowan-Salisbury Schools is changing attendance boundaries in response to the impending closure of Faith and Enochville elementary schools at the end of this school year.

The new elementary districts will shift the populations from Faith and Enochville into nearby schools and move students to even capacity at a couple of existing elementary schools. And as part of its discussion, the district approved a modification to redistricted areas around Millbridge and Landis elementary schools that would fix an overpopulation issue at Landis while bringing up utilization at Millbridge.

Associate Superintendent of Anthony Vann said Landis, if redistricted areas weren’t modified, would be over 100% capacity while Millbridge would be 72%. The change brings the population to 89% at Landis and 84% at Millbridge. On the map, the dividing line between the two districts was smoothed out and the area for Millbridge’s district was slightly larger.

“It just makes it a little cleaner,” Transportation Director Tim Beck said, adding the change will help the district get students to schools that are closer to them.

Beck said the change would be a win-win.

The district anticipates Enochville will send 111 and 83 students to Landis and Millbridge, respectively. Students from Faith are expected to shift to Koontz, Rockwell and Shive Elementary schools.

Vann said the attendance figures anticipate virtual students who would have otherwise attended both schools coming back to the schools in-person. Though Summit Virtual Academy is a permanent school in the district, the administration expects the new K-8’s population to be larger next school year because of the COVID-19 pandemic.

Vann said teacher allotment plans will come later, but the number of teachers will follow the number of students. The district plans to keep all the faculty and staff employed from Faith and Enochville.

The board on Monday also approved declaring the Faith and Enochville properties surplus after they close in June at the meeting as well.

• The board approved an update to a contract with firm Foley Jones for grant writing services that ultimately secured the district $26.3 million federal grant. The change clarifies a stipulation in the contract to pay the firm $265,291.61, or 1% of the total grant award, for grant writing services and technical support for the first year of the grant, which will be paid out over three years.

The term was included in the original contract, but the change adds clarification and the exact dollar amount. The district found the funding to pay the contract term in consulting services which it did was not using during the COVID-19 pandemic.

• Associate Superintendent Kelly Withers said administration has received feedback for district’s reworking of its alternative program, including a recommendation for a single location for the program. Withers said the goal is to have a proposal to the board by its February business meeting.