High school soccer 2021: History not on East’s side, but Mustangs optimistic 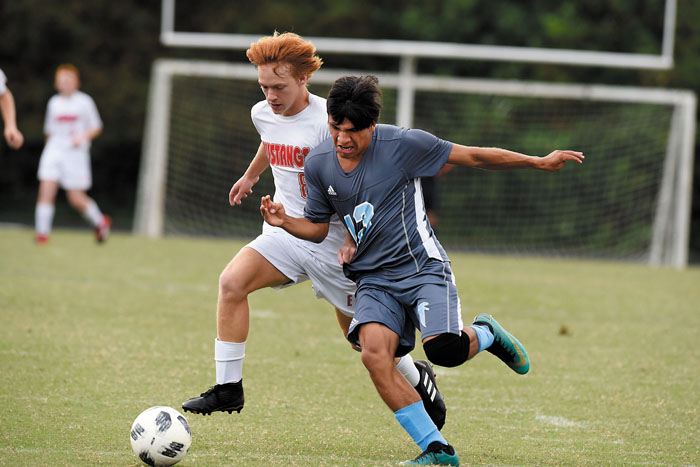 East Rowan will be depending on Jaxon Mastranunzio, left, this season. File photo by Wayne Hinshaw, for the Salisbury Post

Second in a series of reports on local teams ….

GRANITE QUARRY — East Rowan’s boys soccer program has seen more than its share of uphill struggles over the years.

East has never won a state playoff game and has managed to qualify for the playoffs only three times, most recently in 2011.

The Mustangs have generally been on the short end of things as far as talent and experience, whether they’ve been trying to compete with the Cabarrus schools or the Iredell schools.

East did win six matches as recently as 2018, but only one of those was in the North Piedmont Conference. That was also a season in which the Mustangs could count on flurries of goals from a  transcendent player — Alex Kalogeromitros.

There’s plenty  of room for progress. East scored less than a goal per match last year, while allowing seven per match. East fought pretty well against county rivals, but there also were disasters, such as a 12-0 shellacking at the hands of North Iredell.

So any success in this condensed season will be sweet. Any victories will be precious.

There’s been a coaching change. David Andrews, the enthusiastic soccer assistant last season and also the school’s boys tennis coach, moves up to head-coaching duties. He’ll get a lot of help from Nermin Hodzic, who was recently named as boys cross country coach of the year for the North Piedmont Conference.

Tennis season starts in March. A lot of high school coaching pools are going to be challenged and stretched by overlapping sports with the modified COVID schedule.

“It’s going to be a weird season and trying to prepare for it has definitely been different,” Andrews said. “But I know our guys are excited about the opportunity to play, and we do have some very good players. We’ve also got a freshman class that’s pretty good, so we can be optimistic about the future.”

“We’ve also had some guys who have been a little bit out of the soccer loop, just coming to school two days a week ,” Andrews said. “And with the uncertainty of this soccer season during the summer and fall, some guys just opted out and decided to get jobs.”

Constants for East soccer in recent seasons have been quick senior defender Drew Roane and senior Jaxon Mastranunzio, who is a scoring threat. Mastranunzio scored three goals in the fall of 2019, the last time soccer was in session.

Senior midfielder Hunter Honeycutt is back and has been joined by his younger brother, freshman Carter Honeycutt.

David Sanchez, a senior defender who transferred from A.L. Brown, is expected to be a key addition, and Andrews likes what he’s seen from junior Elijah Luna, sophomore Jordan Avalos and freshman Ivan Landaverde.

Andrews hopes Luna can provide some of the scoring punch the Mustangs lacked last season.

East has non-conference matchups with West Davidson and Mount Pleasant this week before starting NPC competition.