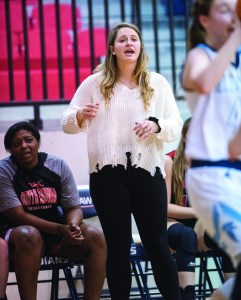 LANDIS — South Rowan’s girls started slowly and didn’t give themselves a serious chance at an upset on Tuesday in a Central Carolina Conference game against Oak Grove.

Oak Grove won 57-33 as the Grizzlies (3-1, 2-1) tuned up for Friday’s game against Salisbury. They came close to beating Salisbury in the 2020 CCC tournament.

South (1-6, 1-3) was never in it. The Raiders were down 20-2 in the second quarter when Eden Childers finally made her team’s second bucket.

“Our defense is where it needs to be,” South head coach Alex Allen said. “We just have to want to score more and we have to look for our scoring opportunities from the start.”

South was down 29-9 at halftime. The Raiders performed better offensively in the second half, scoring 24 points.

Seven different Raiders scored, but none of them scored in double figures.

Carlie Moore led South with eight points. She’s averaging 8.1 per game and is South’s leading scorer for the season. She’s also the only Raider who has scored in every game.

Mackenzie Chabala scored seven. She’s also having a good season. She’s second on the team in scoring and rebounding.