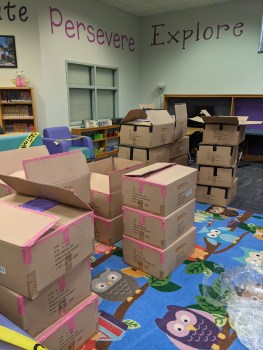 Photo submitted - Boxes of coats waiting to be unpacked.

SALISBURY – Any student in need of a brand new winter coat at Enochville Elementary School received one last week.

The coats, donated by nonprofit Operation Warm, are part of the organization’s mission to donate winter coats to children in need. It has served millions of kids. Enochville Principal Kelly Shoffner said the coat donations align with Enochville’s renewal plan, focusing on the whole child.

Enochville is a Title I school, meaning it a large portion of its students are economically disadvantaged.

The process started in October, and the school received an email during winter break with a notification about the coats.

The coats help keep kids warm in the winter, but they also mean a child can play outside when it is cold, socialize and, as Operation Warm describes it, offer emotional warmth in addition to physical warmth.

Enochville guidance counselor Lugina Dumas applied for the program and organized getting coats to kids. Shoffner said the Operation Warm donated more coats — 190 — than the school applied for. That still wasn’t enough to cover everyone, so the school asked families to opt out if their student did not need a coat.

“Enochville of course is a smaller school, so that probably made it a lot easier for us to get funded,” Dumas said.

Dumas said she noticed some kids were not dressed properly for the weather — some in just a sweatshirt or a hoodie — and she wanted to make sure every kid could have a coat. The kids were excited to try their coats on, and many of them were in need of one.

The school also tries to provide other clothing essentials such as shoes for students in need throughout the year.

“Whenever we do have kids that are on the top of our radar as far as our clothing, we reach out to families to make sure it is OK for us to provide them with additional clothing,” Dumas said.