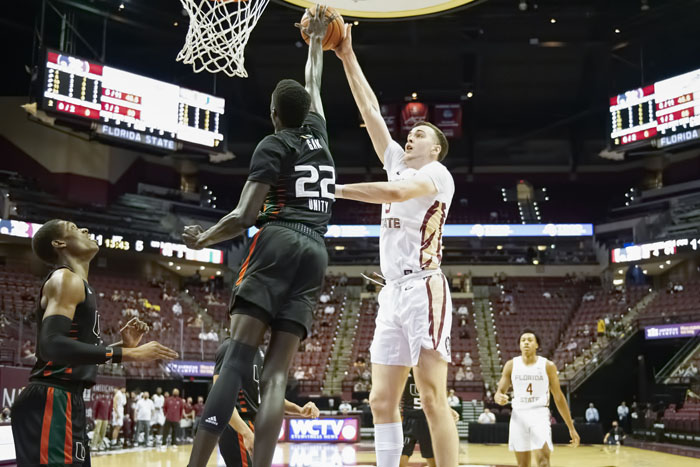 Walker made 5 of 6 shots from the floor, and Calhoun was 4 of 6 shots.

Osborne has been a reserve in all of Florida State’s games and has now scored in double figures in three of his last four games.

“He is giving us tremendous effort,” Florida State coach Leonard Hamilton said. “He’s playing with a lot of energy, a big guy who is an active inside rebounder. He’s a very valuable asset to our program.”

“We did a really good job to start the second half,” Larranaga said. “Then we had a couple of easy shots that didn’t go down for us. We were never able to recover from that.”

The Seminoles had a staggering rebounding advantage, 45-23. In their last five games, FSU has had the rebounding edge four times and tied in the other game.

Miami’s season has been significantly impacted by injuries and Elijah Olaniyi (shoulder) was added to the list. The Hurricanes were already playing without guards Chris Lykes (ankle) and Earl Timberlake (shoulder) as well as center Rodney Miller Jr. (knee).

Ohio State  rallied from an eight-point deficit in the second for their second consecutive victory and fourth in five games.

Justice Seuing had 13 points and 10 rebounds for the Buckeyes. Zed Key went 5 for 5 from the field.

Kyle Young also had a perfect shooting night for Ohio State, scoring 10 points on 3 for 3 from the field and the free throw line before fouling out with 5:01 left.

Penn State, whose season has been peppered with COVID-19-related postponements — including this game, originally set for Jan. 6 — dropped its fifth straight on the road.

Graduate transfer Bryce Aiken scored a season-high 21 points and Myles Cale had 18 of his 20 in the first half to lead Seton Hall.

For most of the night it appeared the Pirates would avenge a 36-point loss this month to Creighton, but the Bluejays switched to a zone in the second half and it turned the game.

Creighton did not take its first lead in the second half until Zegarowski hit a 3-pointer with 1:07 to go for an 81-79 edge. The Pirates tied the game on a layyp by Takal Molson with 51 seconds left, but Ballock nailed his seventh 3-pointer to put the Bluejays ahead for good.

Seton Hall had a chance to tie it with eight seconds to play, but Shavar Reynolds’ off-balance 3-pointer was not close.

For the first time this season, Seton Hall allowed a small group of family members to attend the game. One of them was Mamukelashvili’s mother, Marianna Oakley. She flew in from the Republic of Georgia to watch her son play a college game for the first time.

Keve Aluma and Justyn Mutts had 14 points each and reserve Hunter Cattoor scored 13 for the Hokies (12-3, 6-2 Atlantic Coast Conference), who were coming off a 78-60 loss last Saturday at Syracuse.

CLEMSON, S.C. (AP) — Clemson coach Brad Brownell was happy with the victory. He was even happier with the toughness his Tigers showed in breaking their demoralizing losing streak.

Aamir Simms had 16 points, Al-Amir Dawes added 15 and Clemson turned up the defense to beat No. 25 Louisville 54-50 on Wednesday night.

“It’s been a hard eight or nine days,” Brownell said. “So it’s not only the win, but the way we did it.”

The Tigers (10-4, 4-4 Atlantic Coast Conference) snapped their three-game losing streak by holding Louisville (10-4, 5-3) to a season-low in points and dynamic guard Carlik Jones to just 11 points on 4-of-14 shooting.

“I think everyone in the country forgot the kind of defense we play,” said Simms, the team’s leading scorer and senior leader.

Simms showed that early on, blocking Dre Davis’ inside shot, chasing down the rebound from an awkward position before hitting a three on Clemson’s next possession.

Simms clapped and exhorted his team to play with the fire it had in opening 9-1 and rising to No. 12 in the country before its recent struggles — it had lost the three games by an average of 24 points.

“We probably didn’t handle being ranked high well,” Brownell said.
The prospects of ending it against the Cardinals and Jones seemed slim, too, with Louisville averaging better than 70 points.

However, Clemson clamped down throughout the contest.

Louisville coach Chris Mack said the Tigers made it difficult on Jones. “They had guys in the lane when he got the ball there, they bodied him and rode him and put hands on him and you’ve got to be able to play through contact,” he said. “You give Clemson a lot of credit. They had a plan, and they executed that plan defensively.”

Hunter Tyson’s jumper with 7:34 left put the Tigers up for good while Louisville couldn’t buy a bucket as it missed six of its next seven shots.
When Dawes connected for his fourth 3-pointer of the game with 2:51 left, Clemson had its biggest lead of the game at 49-41.

Louisville closed to 49-45, but Simms converted a three-point play to build back the lead.

The Cardinals, who shot 32%, had their fewest points in a game this season.
Louisville came in hoping to stay in that next tier behind Virginia, perfect so far in the league at 7-0. The Cardinals bounced back from two straight defeats with a win over Duke this past Saturday and hoped to carry that momentum into Clemson.

But the Tigers have won the past two meetings here including a 77-62 drubbing over then-No. 5 Louisville a season ago.

Louisville: Perhaps the Cardinals should look at not playing at Clemson. It was the fourth straight defeat for Louisville on the road against the Tigers. Their only win here came in December of 1973.

Clemson: What to make of the Tigers this season? They’ve rallied in the second half of all four of their ACC victories this season including against ranked opponents in Florida State and Louisville, the last after getting outplayed in the second halves of sizeable defeats to Virginia, Georgia Tech and the Seminoles.

Clemson’s Brownell said Dawes, the team’s starting sophomore guard, had struggled with a groin injury the past few games, shooting just 3 of 19 and 2 of 12 on 3-pointers in the three defeats. Dawes felt better in this one and it showed, Brownell said. Dawes was 4 of 8 on threes in this one and reached double figures for the first time in the past six games.

This game was originally set for March 3 until both team has to postpone contests with Boston College this week (Clemson on Tuesday, Louisville this coming Saturday) because of coronavirus concerns within the Eagles program. So the ACC sent the Cardinals South and freed up the March date for potential make up games for both teams. Mack made no excuses saying his team has won in similar situations.