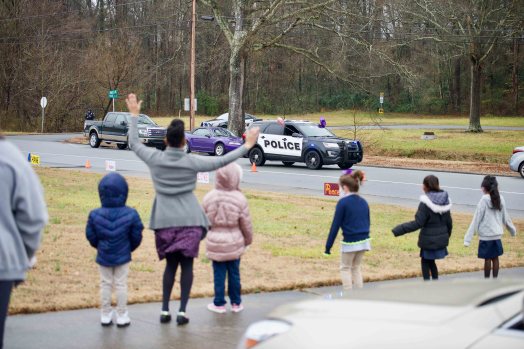 Carl Blankenship/Salisbury Post - Overton students and faculty cheering on Salisbury Police Department's NICE truck as it makes a lap in front of the school. 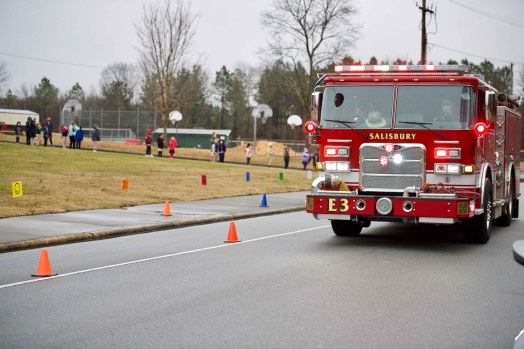 Carl Blankenship/Salisbury Post - There were fire trucks, police vehicles and local leaders lined up to drive past Overton on Tuesday morning. 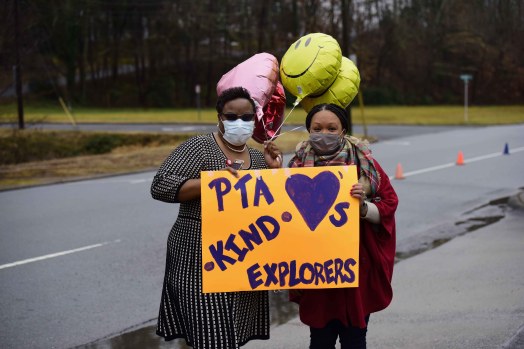 Carl Blankenship/Salisbury Post - Overton Principal Marae Reid with Rowan-Salisbury Schools Board of Education vice chair Alisha Byrd-Clark. Clark was part of the parade lineup and stopped by after she made her pass.

SALISBURY — The rain held off long enough Tuesday for Overton Elementary to have a parade.

Police, firefighters, local politicians and others came together to show the students at Overton they care, making a quick loop in front of the school while faculty and students were spread out over the school’s courtyard area.

This kickoff event would normally take the form of a kindness tunnel, with the folks in the parade greeting students as they come in the door and pass through a “kindness tunnel.” Overton Principal Marae Reid said the school decided to hold a parade outside instead so the school could continue the tradition during the pandemic.

Overton has a courtyard area in front of the school with a sidewalk where students can spread out and still see the road. Reid said the parade was a bigger production than she imagined and it was wonderful for the school.

Tuesday was the school’s kickoff for the Great Kindness Challenge, an annual worldwide event the school participates in. The challenge normally lasts one week, but Reid said the school is stretching it to two because of the blended schedule during the pandemic.

As part of the celebration, Tuesday was also crazy hair or sock day. There will be other kindness-themed activities, too, including a tie-dye day. Students also received menus of ways they can show kindness to others and T-shirts.

Reid credited school counselor Rosemary Wood for putting the challenge together, adding that Wood makes other fun things happen at the elementary school

Sgt. Daniel Lancaster, of the Salisbury Police Department, was a critical part of the parade, which was originally scheduled for Monday. When it looked like the parade could be rained out a second time, Lancaster brainstormed ways to keep the event going, including a Zoom call with the students. Lancaster said everyone he spoke to thought it was important to come out in person to support the kids.

“The love our community has for people, it definitely goes past the 6-foot rule,” Lancaster said. “We may not be able to stand close and tight and stand right next to each other, but the love we have that can travel throughout our community can’t be stopped.”