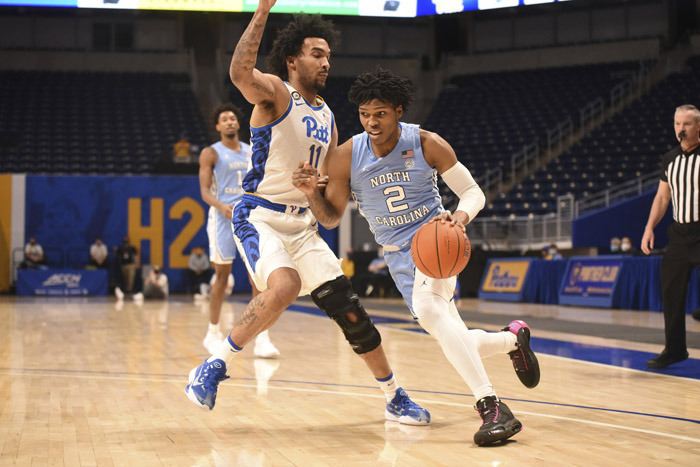 PITTSBURGH  — Armando Bacot scored a season-high 21 points and had 10 rebounds to lead North Carolina to a 75-65 victory over Pittsburgh on Tuesday night.

Bacot was 8 of 10 from the floor and was two points shy of his career best. He also had a season-high three blocks. Garrison Brooks scored 16 points and Kerwin Walton had 10 for the Tar Heels, who shot 32 of 61 (52.5%) overall.

Justin Champagnie scored 23 points and had 10 rebounds to lead Pitt (8-4, 4-3), who has lost consecutive games for the first time this season. Ithiel Horton added 12 points.

The Tar Heels took the lead for good five minutes in and built a 34-27 halftime lead. Consecutive dunks from Leaky Black and Bacot gave the Tar Heels their largest lead, 66-50 with about eight minutes left. The Panthers answered with a 13-2 run to pull to 68-63 with 3:50 remaining but didn’t get closer.

AUSTIN, Texas (AP) — Austin Reaves scored 23 points and made two free throws with 18.3 seconds left that proved to be the difference as the Sooners edged the Longhorns.

Hill missed his first free throw, then intentionally missed his second but failed to hit the rim, giving Texas the ball. The Sooners (10-4, 6-3) then intercepted a long pass to end the game, sending Texas (11-3, 5-2) to its second Big 12 home loss. The Sooners have won four in a row.

Texas had rallied from 11 down in the second half despite foul trouble that reduced the Longhorns to five scholarship players by the end.

Texas played without coach Shaka Smart, who announced Monday he has COVID-19 and is in isolation.

TUSCALOOSA, Ala. (AP) — Jaden Shackelford scored 21 points to help the Crimson Tide complete its first regular season two-game sweep over the Wildcats since 1989.

After a back-and-forth second half, Davion Mintz’s 3-pointer put Kentucky up 54-52 with 4:52 remaining in the game. The Alabama defense then made stops on five straight possessions which led to a 10-0 Crimson Tide run that essentially put the game away.

For a team that came in known for its 3-point shooting, Alabama made its first three attempts and then struggled for the rest of the game. The Crimson Tide didn’t hit their first 3-pointer of the second half till Shackelford made one with 9:48 to put Alabama up 47-43.

Alabama senior Herbert Jones finished one rebound and two assists shy of a triple-double and went 9-for-10 from the free throw line down the stretch to help seal the game for the Tide.

This game was much more tightly contested than the 85-65 Alabama win on Jan. 12, but in the end the Kentucky (5-10, 4-4 SEC) offense couldn’t convert in the final few minutes of the game until it was too late. The Wildcats were led by Mintz, Dontaie Allen and Olivier Sarr all with 12 points. The Wildcats fell to 0-10 on the year when scoring 65 points or less.

Pons was a critical force in the first half for the Vols. In the final 2:30 of the game, it was freshman Keon Johnson who scored four of his eight points, while taking an important charging foul, to seal the victory for Tennessee (11-3, 5-3 Southeastern Conference).

Mississippi State was led by Iverson Molinar with 16 points and D.J. Stewart with 11. Abdul Ado had 12 rebounds and Quinten Post pulled down 10 as the Bulldogs dominated the boards, 42-30.

After leading by three at halftime, Tennessee struggled to weather Mississippi State’s second half rally.