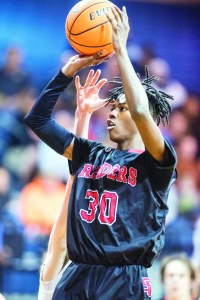 Some squad members made it back healthy. Nine Raiders scored. Marcus Holloman had a career game with 15 points.

Barrett Thompson did a good job of attacking and getting to the foul line and scored eight points.

The bad news was the Raiders (2-4, 1-2) basically knocked themselves out of a winnable game in the third quarter.  Down 36-30, they had a series of unforced turnovers while running their halfcourt offense, and Oak Grove turned every mistake, every shaky decision, every soft pass, into a transition score on the other end.

“Turnovers are very tough for us to overcome, as a team,” South head coach Daniel Blevins said. “We struggled for a stretch in the third quarter and got really sloppy with the ball. We gave the ball away too many times.”

South went from down six to down 20 in a hurry.

“We got down 20, and during a timeout I challenged them to dig in,” Blevins said.  “We got it back to as close as seven, but we just couldn’t get the scores down the stretch to make it a game.”