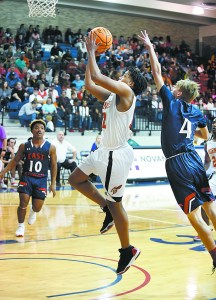 Cameron Stout led the Hornets with 16 points. Photo By Wayne Hinshaw, for the Salisbury Post.

LEXINGTON — Salisbury’s boys basketball team made the plays early in the fourth quarter when Tuesday’s game could have swung either way and stayed tied for first in the Central Carolina Conference.

Salisbury was able to get out in transition and had some of its best offensive production of the season during a 45-point second half. The Hornets were down 24-22 at halftime.

A lot of guys contributed to Salisbury’s fourth straight win.

Nate Brown had 13 points and did a nice job of getting to the foul line. He was 7-for-9 on free throws and had eight rebounds.

Mike Geter scored 10 points and made some key free throws in the fourth quarter.