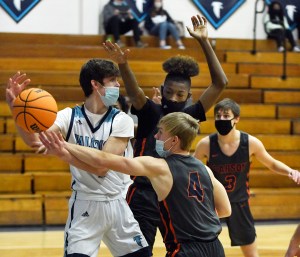 STATESVILLE — The shooting percentages were almost identical, with both teams firing away in the 45 percent range, but West Rowan demolished Statesville 86-61 on Tuesday in North Piedmont Conference basketball.

The difference was on the backboards, where the Falcons overwhelmed the home team 44-24.

Macari Allison had 11 rebounds for the unbeaten and second-ranked Falcons (7-0, 5-0), while Zeek Biggers had eight.

Braden Graham led the scoring onslaught with five 3-pointers and 29 points. It was a season-high for Graham, who scored in the 30s three times last season as a South Rowan Raider.

Statesville’s scoring came either at the rim, where Chris Brown got most of his 17 points, of from very long distance. Messiah Robinson bombed in 22 for the Greyhounds (2-2, 2-2), while Zamari Stevenson had 14.

West pretty much settled things with a 26-9 first quarter. The Falcons led 47-23 at the break.