High school basketball: Another one bites the dust for Carson girls 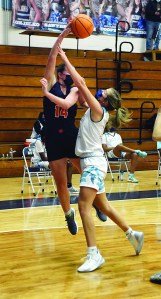 CHINA GROVE — Carson’s girls basketball team is ranked eighth in 3A and the Cougars appear headed for an undefeated regular season.

Carson has faced all five of its North Piedmont Conference foes and the closest game on the first tour through the league was a 25-point win at West Rowan. Carson has scored 60-plus points in every outing, and Carson has held everyone except West under 30 points.

The latest victim for the Cougars was a decent South Iredell team that got annihilated in the first and third quarters on Tuesday. Carson led 26-6 after the first quarter and outscored the visitors 24-0 in the third quarter. The final was 68-25.

“We had a lull in the second quarter, but we stayed engaged throughout this one and we responded to that lull with a big third quarter,” Carson head coach Brooke Stouder said. “A lot of people contributed. We were able to get out in transition, and that’s when we’re at our best.”

Ellie Wilhelm made three 3-pointers, scored 11 and had three steals. Carleigh Perry had seven rebounds and shot 4-for-7 for 11 points.

Hannah Isley and Mary Spry had similar stat lines. Both had six points and three steals.

Jaden Vaughn, a senior playing basketball for the first time since middle school, didn’t score but had seven rebounds.

“She’s getting more comfortable out there,” Stouder said. “She did a great job tonight.”

Guard Ashytn Zeigler has been scoring bushels of points for the Vikings, but Carson held her to five. Wilhelm started the game defending her.

“Zeigler can shoot and she can handle the ball,” Stouder said. “We didn’t change what we do for her, but we definitely were aware of her.”

Carson plans to make up a non-conference game at Davie today.