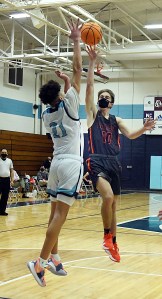 “You know, it’s 43-37 with under six minutes to go, and I felt good about how we had battled to get to that point, and we’re thinking about pulling off a miracle win,” Carson head coach Brian Perry said. “But then everything kind of fell apart on us. We’d miss an easy one, and then they’d score on the other end.”

Carson was wrecked by 8-for-28 free-throw shooting.

Carson’s season has been bizarre, to say the least. The Cougars have been able to play every game, but they’ve been short-handed for almost all of them.

There may be some light at the end of the tunnel. Emory Taylor finally was able to play again and he scored 16, mostly from the 3-point line, on Tuesday. Brodie Johnson, another key player, has been back for the last two games.

AJ Merriman and Hunter Burris had quite a few steals, but production from just about everyone has been up and down, inconsistent.

“We’re inexperienced and not having everyone being able to practice has made for a rough couple of weeks,” Perry said. “We’ve never been able to get into any sort of a groove.”