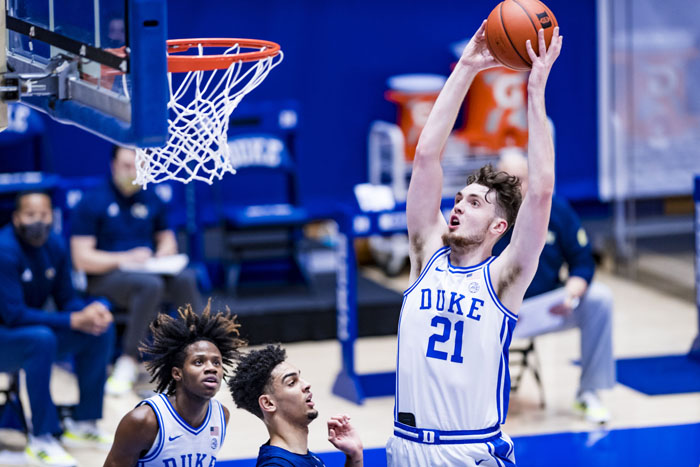 Duke’s Matthew Hurt skies over the rim with the ball in Tuesday night’s victory over Georgia Tech. Photo courtesy of ACC

Duke closed the first half with a 10-0 run and went to intermission with a 33-25 lead. After Mark Williams threw down a dunk to tie it at 25 with 3:37 before the break, Steward made two foul shots and sank a pair of 3-pointers. Georgia Tech missed its last five shot attempts and committed four turnovers in the last four minutes.

Hurt scored 17 points and Jordan Goldwire had 11 for Duke.

The Blue Devils entered Tuesday’s game with the fewest number of wins in their first 10 contests since the 1982-83 season. The 1994-95 squad was the last time a Blue Devils team finished below .500 going 13-18.
Georgia Tech returns home to face 16th-ranked Florida State on Saturday. The Blue Devils, with six of their next nine games at home, host Clemson on Saturday.