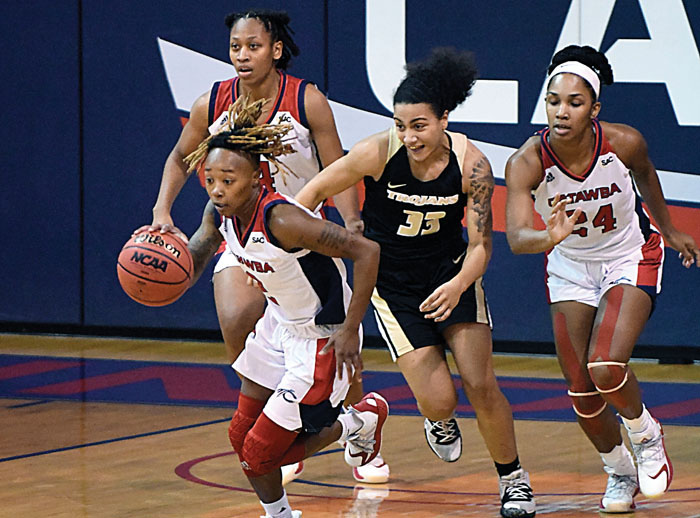 Catawba’s Shemya Stanback 2 starts a fastbreak during a game against Anderson in Nomber. Catawba lost to Tusculum 68-61 Monday night. photo by Wayne Hinshaw

The Indians, who have experienced two lengthy COVID pauses, returned to action Saturday and were playing their first home game at Goodman Gym in more than two months. They lost to Tusculum 68-61 in a South Atlantic Conference game that included wild flurries by both teams.

Catawba opened the season by beating Anderson at home, and has also managed road wins at Coker, Mars Hill, Lenoir-Rhyne and Lincoln Memorial. Tusculum was the first team from the SAC’s top tier that Catawba has encountered, and the Indians had plenty of chances to prevail despite a shaky shooting night.

Tusculum (10-1, 10-1) shot a lot better than the Indians in all phases — 47% from the field, 75% from the foul line and 8-for-16 from 3-point range. The Pioneers put four in double figures, with Brianna Dixon getting 19 points and Maddie Sutton producing 10 points and 16 rebounds.

Catawba shot just 33% from the field, went 6-for-22 on 3-pointers and missed six of 13 free-throw opportunities. Catawba (5-1, 5-1) stayed in the game with superior depth, with an enormous 14-4 advantage in the turnover column and with a 17-5 edge in second-chance points.

Senior guard Shemya Stanback scored 21 points, but no one else had a major scoring night. Janiya Downs came back from an 0-for-4 start to provide 10 points and eight rebounds. Key players Lyrik Thorne, Taisha DeShazo and Sara McIntosh combined for 5-for-26 shooting. That contributed to an uphill fight.

Tusculum enjoyed a spurt late in the first half to take a 36-28 lead.

The Pioneers led by 11 and appeared to be in control in the middle of the third quarter, when Catawba just took over. The Indians outscored Tusculum 19-2 in a stretch of about seven minutes and went from trailing 41-30 to leading by 49-43.

Jalia Arnwine’s layup with 4:50 left tied the game for the Pioneers at 59-all.

Downs made two free throws for a 61-60 lead at the 2:11 mark, but the Indians didn’t score again. Dixon made a layup to put Tusculum ahead to stay.

Catawba plays at Limestone Wednesday and is back home Saturday against Mars Hill.