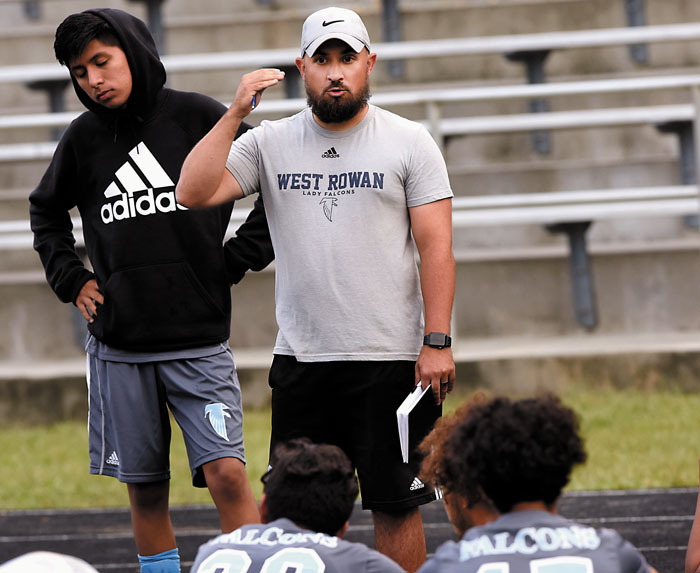 First in a series of reports on Rowan soccer …

MOUNT ULLA — Boys soccer has arrived, although it won’t be business as usual.

This year, there are masked coaches, masked players on the field as well as on the sideline and balls being sanitized frequently. There’s a fan limit of 100, although that’s generally plenty in Rowan County. Most games will be in the cold. Some games will be played in the 30s. Proper warmups are going to be essential to avoid pulled muscles.

“We can’t stand too close together, and even after goals, we can’t celebrate with any handshakes or any sort of contact,” West Rowan coach Alan Puglia said. “But the guys are excited about playing. Every team is in the same boat, and no one has any advantage. We’ve done everything we can to prepare for this and now we’ll roll with it.”

This is Puglia’s third season at the helm of a program that hasn’t seen the state playoffs since 1998.

The Falcons have made strides under the Pennsylvania native and former goaltender who has a master’s degree from Duquesne. He is a guidance counselor at West.

The strides haven’t necessarily shown up yet in the win column, but the Falcons aren’t rolling over for anyone. The team scored 35 goals last season while yielding 58. The 2019 season concluded with hard-fought 1-0 losses to North Piedmont Conference adversaries Statesville and North Iredell.

While he lost 11 seniors from the group that last took the field in the fall of 2019, Puglia is optimistic that this team can be at least as good as the last one.

“We’ve only got a few returning starters, but there’s no question that we’ve got some talent,” Puglia said. “The question is can we bring it together without having very much experience and without having a normal preseason of drills and preparation. It’s been difficult to work on soccer skills while social distancing, but we’ve done a lot of conditioning work.”

Workouts began taking shape as far back as last summer when players still had no idea when their season would start or even if there would be a season at all.

“The question everyone was asking me was was I sure they would have a season,” Puglia said. “I told them all along to just play and let me worry about the other things. The only thing we knew for sure as we tried to prepare was that nothing was going to be like it’s ever been.”

It’s been an effort and a struggle to get here.

Puglia’s basic philosophy is to start with defense and build forward, although this team may be an unusual one for him, with a less stable defense and more offensive creators.

West’s goal output last season was widely dispersed and two of the main guys are no longer in uniform. Michael Leon had nine assists for the 2019 Falcons, while Joseph Turcios scored eight goals.

The leading returners who figured in the goal-scoring are midfielders Aleksis Suarez (4 goals, 6 assists) and Salvador Bautista (4 goals, 3 assists).

But two newcomers may provide the Falcons with the sort of firepower they haven’t had.

Those two talented players are Carlos Romero, a senior forward who is new to West, and Jonny Hernandez, who is making a comeback after being a jayvee standout for the Falcons.

“Carlos is a really skilled player and Jonny has a lot of ability and we’re glad he decided to come back out,” Puglia said. “We’ve got guys who should be fun to watch. ”

West has three good keepers, led by Jose Elizalde. He was the No. 2 guy last season, but he saw quite a bit of action in goal.

“He’s a good quarterback back there,” Puglia said. “He sees the field. He keep things under control.”

Puglia said the makeup of the team will be about 90% Hispanic, which is a trend that’s been going on for a while in Rowan soccer.

“Soccer is a big part of their culture,” Puglia said. “That means passion and desire are things I never have to worry about. My only worry is putting it all together. It’s all like a big jigsaw puzzle. You’ve got the pieces on the table, and you’re trying to figure out how it all fits. It’s a short season, so we’re hoping we can catch fire early.”

West lost to Robinson 5-1 on Monday.