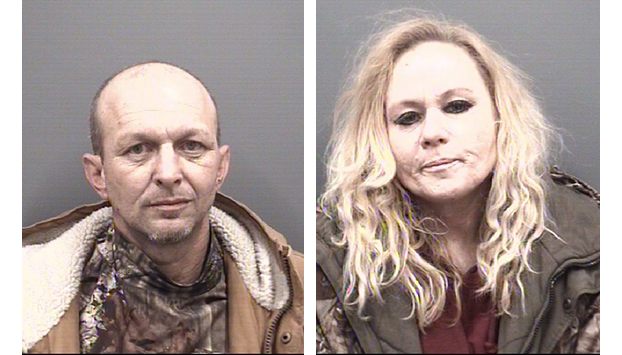 SALISBURY — A Rockwell man and woman face burglary and drug charges after a sheriff’s deputy found both while conducting a check of a business at 5200 South Main Street.

The charges stem from an incident at American Century Home a building at 5200 South Main Street between Webb Road and Grace Church Road. While conducting a business check there at about 5 p.m. on Thursday, a Rowan County sheriff’s deputy found a blue Chevrolet truck parked at the end of a lot and Uphoff in the driver’s seat, said Maj. John Sifford.

Inside the pump house building, a door was open and there were various hand tools inside and cooper wire that had been removed from the inside. The doors of a number of electrical panels had also been opened.

Sifford said the deputy found brass knuckles in one of Givens’ pockets and that Uphoff admitted to having heroin and two loaded syringes inside a zipper case. Inside the truck, there were other syringes and copper wire that had been rolled up.

The truck was towed, and both were arrested and booked into jail with a $5,000 bond for the charges.

Uphoff faces additional drug charges for a small piece of yellow paper that was folded in her front pants pocket and a white, rock-like substance that was about the size of a dime, Sifford said. She received an additional $2,500 bond for those charges.