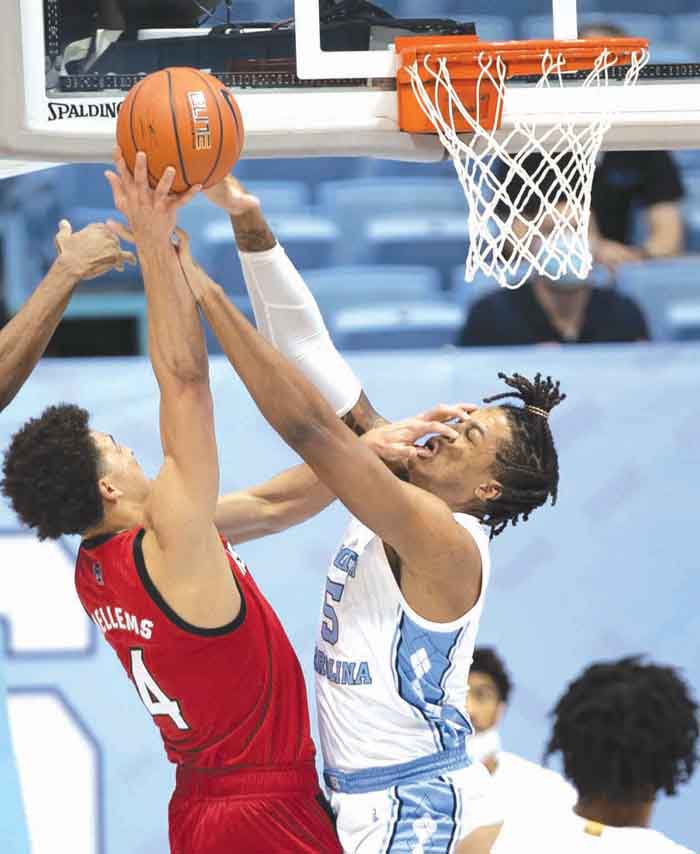 Photo courtesy of ACC — NC State’s Jericole Hellems gets a hand in Armando Bacot’s face as he goes up for a shot.

CHAPEL HILL — Day’Ron Sharpe and Armando Bacot combined for 33 points and 18 rebounds as North Carolina used its strength inside to beat North Carolina State 86-76 on Saturday.

Sharpe scored 16 points with 10 rebounds and Bacot had 17 points and eight boards to lead the Tar Heels (10-5, 5-3 Atlantic Coast Conference) to their fifth win in six games and prevent a season sweep by the Wolfpack, which won 79-76 on Dec. 22. The victory also kept the Tar Heels unbeaten this season in six home games. N.C. State (6-5, 2-4) lost its fourth straight.

UNC had a 10-point lead at the break and a Bacot dunk made it a 14-point edge with seven minutes left. The Wolfpack worked the margin down to six with just under four minutes to go with a 14-6 run topped by Devon Daniels’ 3-pointer but didn’t get closer.

Caleb Love added 15 points and five assists, and Anthony Harris and RJ Davis had 10 points each for UNC, which shot 54%. The Tar Heels outrebounded N.C. State 44-30, including 14-7 on the offensive boards. They had 13 turnovers against an N.C. State team that came in averaging nearly 18 takeaways, though the Wolfpack had 10 steals.

Bacot scored 10 points over the first 10 minutes of the first half. Sharpe then took over with three buckets in a 12-3 run for a 10-point lead with 1:30 left and UNC went into the break leading 43-33, its largest halftime lead of the season.

The win marked the Tar Heels’ first conference game not decided by single digits this season.

UNC plays at Pittsburgh on Tuesday while N.C. State is host to Wake Forest on Wednesday.

BOCA RATON, Fla. (AP) — Jahmir Young scored 25 points, including a free throw with three seconds remaining, and the 49ers held off Florida Atlantic. Kenan Blackshear stole the ball, scored and converted a three-point play with 1:35 remaining to help the Owls pull to 67-66 but they got no closer.

UNC Wilmington closed the game with an 11-2 run.

Dylan Painter tied a career high with 23 points and had 19 rebounds, his fourth-straight double-double, for the Fightin’ Blue Hens (4-7, 2-4).

BOONE (AP) — James Lewis Jr. had a career-high 22 points plus 14 rebounds as the Mountaineers romped.

Matt Halvorsen had 19 points for the Catamounts (7-7, 0-5), who have now lost five straight games.