She recounted the painful details of two devastating injuries in a voice that was mature and hopeful, but it was also a teen’s voice that was choking back tears.

That phone call was a good indication that while volleyball was in the vanguard for the return to high school athletics and a noble attempt at normalcy, it would be anything but a routine volleyball season that played out in quiet, sterile, almost empty gyms in a COVID winter.

Years from now people may be puzzled when they explore the volleyball record book and encounter a 2020-21 season in which West was 9-4 and Carson was 6-8.

What in the world happened? Why were so few games played? Well, we know the answer.

Volleyball stood tall in November and December as the lone day-to-day sport in Rowan County. It’s a sport with standings and stats and college signees and interesting personal stories. It’s a sport that a lot of people cared about, even with game attendance restricted.

During the pandemic, the Post actually had more time to focus on volleyball than ever before. In normal autumns, volleyball is relegated to the thankless role of filling some of the gaps between Friday football games.

But this year, the volleyball girls became stars.

The three who stood tallest in this weird, masked season were seniors.

Carson’s Jaden Vaughn, West Rowan’s KK Dowling and South Rowan’s Anna Rymer qualified as special.  Special for their ability and their versatility and their academic work and their personalities. Just about anything a volleyball player can be asked to do — hit, dig, serve and pass — they could do and do well.

It’s unprecedented, but this is an unprecedented season. All three of those girls deserve to be recognized as player of the year for continuing to fight through the adversity and for leading their teams. That’s how they’ll go into the Post’s history books.

A text message to East Rowan coach Sandy Lytton solicited her opinion on which girl was the best of all. After all, she’d had to prepare her team to play against all three.  She was helpful, although she had serious praise for all three.

Based on the eye test, just seeing what the girls could do, without regard to what the stat sheet said, Dowling was the most impressive. She hit the ball the hardest and jumped the highest.

“KK is the most athletic and the most passionate,” Lytton agreed. 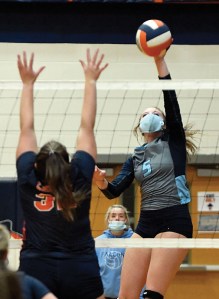 West’s KK Dowling (5) goes up for the ball at the net. File photo by Wayne Hinshaw, for the Salisbury Post

Dowling was the best player on the best team, which always counts for something in a player of the year discussion. Not the most successful team, but the best team. Five-set losses to North Iredell and South Iredell kept West out of the 3A state playoffs.

West’s statistics were dispersed and deflated because of the team’s depth. Kelcie Love was about as effective a hitter as Dowling.

Dowling’s stats aren’t in the same ballpark as Rymer’s — South sends everything through Rymer — and they’re not quite as strong as Vaughn’s. Vaughn was Carson’s first option by a lot.

“Vaughn is the smartest player out there.” Lytton said. “Rymer is a very skilled middle. She can tip left or right and she sees the court well.”

Rymer  has the sort of mind-blowing stats as far as hitting percentage and kill percentage that should place her on All-State and All-Region teams with no sweat.

There’s some disparity in the North Piedmont Conference that was the home to Dowling and Vaughn and the Central Carolina Conference where Rymer ruled. There are more digs and blocks in the NPC. It’s harder to get a kill. Carson finished fourth in the NPC, but Vaughn sparked an emotional win at South Rowan, which went unbeaten again in the CCC.

So the Post’s top three will stand together, not separately.

Most coaches had input on the players who are representing their teams, but all of them would have liked to have at least one more.

West placed five on the team, with Dowling joined by both Ennis sisters, Allison and Ashlee, a mobile and active digger. Love, who will be in the running for the best player next season, makes it easily along with setter Noe Gaeta.

South’s four are two sets of sisters. Freshman Leah Rymer handled the sets for her big sister. Libero Payton Black anchored South’s defense. Cameron Black, one of the county’s most improved players, was South’s best outside hitter as well as a strong defender.

East, which might be ready to turn the corner, has three, the most its had in a while. Tall, athletic Leah Hinceman has a ton of hitting potential. Senior hitter Mikayla Tucker had her best season. Libero Riley Hill has always been pretty special.

Salisbury is represented by Ellen Yang and North Rowan by Bella Smith.

One of the nicest stories of this season was the way the COVID-plagued Hornets finished it. They won on Senior Night. They won twice in the CCC tournament.

North Rowan only won twice, but the Cavaliers won their finale on Senior Night.

As far as memories, the good will outweigh the bad, especially for the seniors.

After all, they got to play. 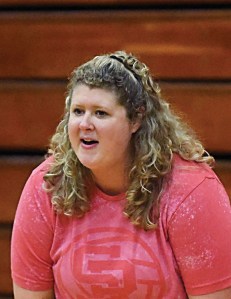 Coach of the Year Jenna Horne wasn’t a difficult choice, with South taking another league title and tournament championship and being the only Rowan team in the playoffs.

With realignment, Horne will lead the Raiders into 3A volleyball next season. She’ll still have the Blacks and one Rymer.