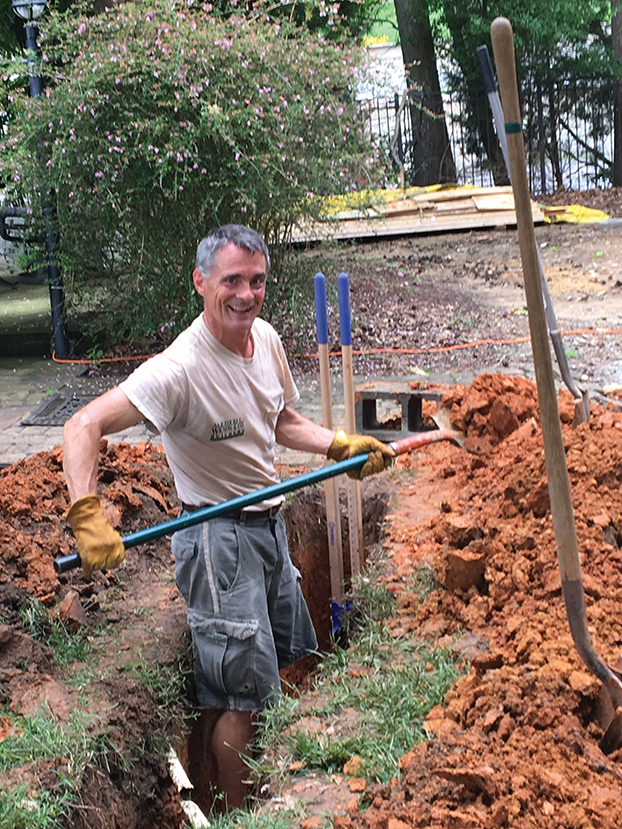 When training to be a contestant on "Tough As Nails," Dan Mikkelson dug holes, lifted cement bags and carried wheelbarrows loaded down with heavy weights. Photo submitted.

As he sat watching the first season of “Tough As Nails,” the latest reality competition show from the creators of The Amazing Race, a thought crossed Dan Mikkelson’s mind.

It was during July when Dan and his wife Winnie had decided to check out the CBS show more or less on a whim. In many ways, the show was similar to other reality TV competitions — a group of contestants from various backgrounds were brought in to compete for a prize.

But in many ways, it was different. The competitors on “Tough As Nails” are blue collar workers like welders, firefighters and veterans, and the challenges they compete in focus on teamwork and manual labor.

That was all he needed to hear.

“We were sitting around during all the social distancing looking for healthy and safe ways to spend our time, so I challenged myself to audition for that show,” said Dan.

An exercise enthusiast who loves to test himself, Dan had considered trying out for other reality competition shows like American Ninja Warrior. The prospect of going through a long, drawn out process, Dan said, hadn’t been worth it.

“The application process was usually going to a casting call in a big city and you wait in line for days and days,” Dan said. “It wouldn’t have been practical to go to normal casting calls.”

But this was during a pandemic, so the casting process would be almost completely virtual.

“I could make a video and I could submit it,” Dan said.

Plus, Dan fit the bill of a blue-collar worker. After working as an engineer for the city of Salisbury for 24 years, Dan retired in 2013 and started a new career as a carpenter, working with Alfred Wilson’s restoration company on construction projects. He also helps create sets for the Piedmont Players, making him more than comfortable with a saw or hammer in his hand.

In August, Dan completed the online application, sent the video off and waited. A few weeks later he got a call — they liked him.

“They contacted me back and asked me to stay in the process,” Dan said. “They went through a series of cuts and I got a series of notifications that said ‘you’re still in it.’ ”

Every time they made another cut, Dan’s sense of hope grew. He started training, spending about 10 hours each week lifting homemade weights and completing crossfit-esque workouts. Since the show makes contestants compete in manual labor tasks, Dan also turned household chores into exercises.

“I was running around the yard with wheelbarrows and picking up cinder blocks and bags of concrete and sand and digging holes, setting ladders up and down and sawing things,” Dan said.

Throughout his training, Dan remained locked in on what he was trying to accomplish.

“Whenever he’s excited about something, he does have that focus about it,” said Winnie, who did the normal workouts with Dan, but refrained from pushing wheelbarrows.

“He makes it fun for himself. It’s not like he’s locked in and stressed about it,” she said. 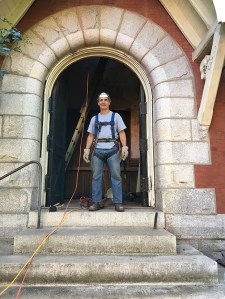 Dan Mikkelson stands in the doorway of the Bell Tower while working on a renovation project. Photo submitted.

Training to be a “Tough As Nails” contestant gave Dan and Winnie an excuse to remain physically fit. Along with other members of their family, the husband and wife have competed in Spartan obstacle races together. Dan himself has run five marathons and has completed triathlons. Now in his 60s, Dan has dialed back the running and has searched for more creative ways to remain fit, like trying out for a reality TV show.

Training for the show became more than just a way to exercise — it was a distraction during quarantine.

“Throughout the whole summer it really gave my wife and I something to focus on and have fun with,” Dan said.

The cuts continued until one day in the middle of October, when Dan got a call that he was one of 18 finalists who the casting directors had whittled down after sifting through over 8,000 applications.

The next step in the process was for him to fly out to Los Angeles, where he would quarantine for two weeks before the show’s producers selected the final 12 contestants who would appear on television.

He’d signed a non-disclosure agreement earlier in the application process, but keeping it a secret was really challenging when he was going to be out of the state for two weeks. He couldn’t tell anyone where he was going, not even the church choir.

“I had to tell them I wouldn’t be there for up to six weeks,” Dan said. “They asked ‘Why not?’ I had to lie to them because of the non-disclosure agreement. I’m like, I’m lying to the choir?”

After landing in L.A., Dan was whisked away to his hotel room and started the quarantine process. As someone who loves activity and talking to people, he expected the 14 days to be torturous, but found that it was actually a great time for more creative workouts and self-reflection.

“I was coming up with creative ways of doing exercises that was a big part of keeping me sane,” Dan said. “I also spent a lot of time reading and going over some philosophical things. It was a chance for personal introspection.” 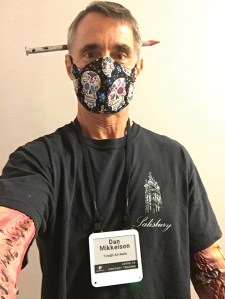 When Dan Mikkelson made it to the final 18 potential contestents, he was flown to Los Angeles and spent two weeks quarantining. Being isolated didn’t stop him from celebrating Halloween. Photo submitted.

There were more interviews with the show’s producers, during which he made his final pitch to be on the cast. As probably the oldest potential contestant, Dan sold himself as being a coach and mentor to the younger competitors. He told stories about what made him tough as nails, including the summers he spent in a cabin in Minnesota as a kid, learning how to use hand tools and an outhouse.

On the penultimate day when the contestants found out who had made it, Dan was informed that he wasn’t among the final 12.

“When it came down to the day they told me I was cut, I think it hurt the casting manager more than it hurt me,” Dan said. “I was kind of consoling the casting manager, letting that person know that I was ok with it and had thoroughly enjoyed the process.”

Instead of being on the show, he’ll watch season two from home with Winnie when it debuts in February. Although the show’s producers invited him to apply for season three, he’s not sure yet.

Winnie would support his decision to give it another chance.

“I’m proud of how far he got in the process,” Winnie said. “I almost hope he’ll try it again.”

Either way, Dan is proud of himself for taking the chance and hopes that his tory inspires others to do the same.

“I’m so glad that I took this shot,” Dan said. “… The story I would have told is the importance of remaining active, the importance of being in tune to your life and taking shots at things you may not have a chance at winning like this.”

For a full list of the “Tough As Nails” season two cast, visit cbs.com.