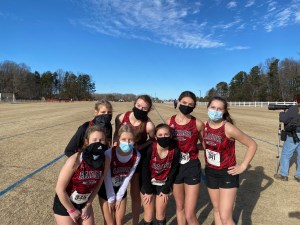 Raiders are ready to go. Photo by Zelia Frick.

In a crazy season they started preparing for in June, the Raiders finally wrapped things up on a cold, windy day at Ivey Redmon Park.

That was a PR for Weaver.

Miller returned after a COVID situation forced her to miss the 2A Midwest Regional.

It was a pretty amazing season for South, coached by Rebekah Frick Julian.

South finished a distant second to Carson in December’s Rowan County Championships, but the Raiders won the Central Carolina Conference and turned in a third-place regional finish to qualify for the state meet.

Rymer is a junior. The rest of South’s top seven are freshmen and sophomores.

South will be moving up to 3A next season.