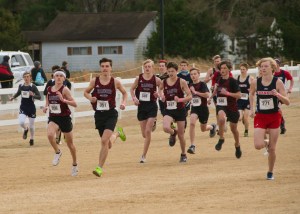 Raiders at the start of the first wave for 2A boys.

In the 2A boys ranks, 100 qualifiers were competing in two sections of 50.

Julian and his South teammates were in the first wave. Julian placed second in that wave, but there were a plethora of fast runners from state champ North Lincoln and regional champ Atkins in the second wave. When scores of the two waves were merged, Julian stood 14th. He was clocked in 16:39.

Eli Julian, Noah’s freshman brother, showed again on Friday that he’s one of the rising stars in the sport. Fourth in his wave with a 16:57 clocking, he was 18th overall.

Based on times, South was expected to finish sixth, but came home fifth.

Fifth place went to a tiebreaker, the sixth runner. Miller, a senior who has been battling shin splints, was the decisive runner who decided a deadlock with Franklin in the Raiders’ favor.

Coach Scott Julian loses three good seniors, but four of the top seven are freshmen. South moves up to the 3A ranks next season.

This was a cross country season unlike any other, but South competed from start to finish.