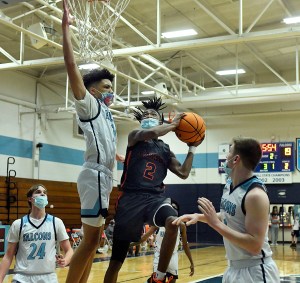 MOUNT ULLA — Lousy starts are easily erased when you have as much firepower as West Rowan’s boys basketball team.

The Falcons couldn’t do anything right early, but they were a freight train for the last three quarters of Friday’s 90-48 North Piedmont Conference romp.

It’s not easy to score 90 after a 10-point first quarter, but West accomplished that feat.

Carson is still short-handed, although the Cougars welcomed back senior Brodie Johnson.

A three-point play by Jalen Moss got West the lead, got the Falcons untracked and started a serious run. When A.J. Mauldin drained a 3-pointer, the Falcons owned a double-digit lead at 23-12 and were on their way to a blowout.

Graham and Mauldin had seven assists each. Harris had five assists and five steals. Zeek Biggers had 12 rebounds, while Macari Allison pulled down 10.