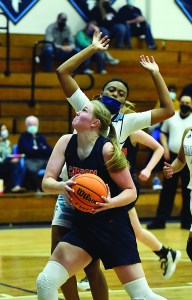 Carson’s Mary Spry works inside against the Falcons. Photo by Wayne Hinshaw, for the Salisbury Post.

On paper, it was a great matchup for first place in the 3A North Piedmont Conference.

In reality, it was Carson’s juniors and seniors against West’s freshmen.

There are going to be some nights like this for West this season, but not too many.

Two seasons from now, West might beat Carson by 70, but that’s a bridge the Cougars will cross when they get there. Carson only has one underclassman in its girls basketball program— the freshman manager.

Carson (5-0, 4-0), which is extremely underrated at 15th, got the knockout start that Stouder was looking for.

Colbie Perry came out raining 3s. She made three from long range in the first quarter and was on her way to a big night.

Carson’s lead after that devastating first quarter? It was 24-5.

“We caused some turnovers with our pressure and Mary Spry and Carleigh Perry ran the floor hard,” Stouder said. “For three quarters, we played well.”

The fourth quarter was not as smooth for Carson.

“We got sloppy against their press and we didn’t do a good job of staying engaged,” Stouder said. “We’re still looking for that game when we play four good quarters. I’m confident it will come. This was our fifth game, and ordinarily we’d just be gearing up now for the Christmas tournament.”

If Carson doesn’t have an undefeated regular season, it’s going to be a shock. After that, well, they’ve got a chance to get it done in the playoffs, and they’re aren’t many years you can say that.

Colbie Perry, a senior, would’ve cruised to 1,000 career points in a normal season, but there won’t be nearly as many games in this one. Perry scored 18 Friday on 7-for-12 shooting and that will help her cause. She has 938 now.

“The key is not to think about it, to just go out and play hard,” Stouder said. “Colbie wasn’t worried about it tonight. She had one of her best games.”

Mary Spry, who has been a big addition to the Cougars in the paint, shot 7-for-9 for 17 points and added nine rebounds and three steals. Carleigh Perry had 11 rebounds. Kary Hales had four steals. Hannah Isley went to the rim hard and scored 12 points. She also had three steals.