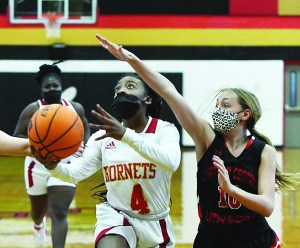 Lexington didn’t manage more than five points in any quarter, and the Hornets crushed the Yellow Jackets 59-14.

Lexington (1-4, 0-2) is in a rebuilding season and also has been pummeled by West Rowan and North Rowan.

There is expected to be some competition for the Hornets in the Central Carolina Conference. Really, there is.

North Davidson and Ledford are still out there, as is Oak Grove, the team that nearly beat Salisbury in the 2020 CCC tournament. But the last three outings have been one-sided affairs, with Salisbury (5-1, 3-0) having the games won at halftime. Second halves have been spent working on new wrinkles on defense and offense.

Everybody played a lot and everyone scored for the Hornets.