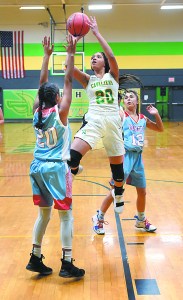 North (4-0, 3-0) got the job done mostly on the defensive end in a Yadkin Valley Conference game, beating Uwharrie Charter 49-36.

“Defense was the key to our success,” North’s first-year head coach Anthia Smith said. “We were strong in the second and third quarters, and we didn’t give up many second-chance points.

Wilkerson, a junior, is very consistent and has 975 points for her career.

Freshmen center Kadence Vuyou grabbed some rebounds and was a presence inside.

“We worked together on both ends of the floor and it allowed me to see a lot of our versatility,” Smith said.

North trailed the Eagles (2-2, 1-1) after a quarter, but the Cavaliers put up good numbers in the middle two quarters to take control.