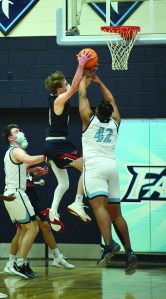 GRANITE QUARRY — It was one of those shots that you’d better make it, if you take it.

Up six points against Statesville with 1:30 left, East Rowan guard Dylan Valley let one fly from deep in the right corner.  Valley was almost in Rockwell.

But Valley obviously was confident that he’d make it and East coach Andrew Porter shared that confidence.

“We ran a play and if the shot’s there, shoot it,” Porter said. “You always want your shooters to have confidence. He’s a shooter.”

Valley isn’t always on, but when he is, 3-pointers look like free throws. The sophomore guard shot 8-for-10 and made six long ones. He scored 22 points to lead East’s 69-56 North Piedmont Conference victory over the Greyhounds on Friday.

East (4-2, 3-1) had been 0-6 against the Greyhounds the last three seasons. East also has ended losing streaks against South Iredell and Carson, albeit a short-handed Carson squad.

Statesville doesn’t resemble the 2019-20 NPC regular-season champs right now, but it’s still Statesville. That means a lot of athletes, a lot of speed.

East did a lot of things right to negate that speed.

“We stuck to the game plan which was to make Statesville take contested jump shots,” Porter said. “We wanted to limit their transition game and make them play against our set defense. Make them take a jumper, and then get the rebound. Limit them to one shot.”

Cameron Padgett, who scored 12 points, and Vincent Jones led the Mustangs on the boards. Jones didn’t score as much as he usually does, but Porter liked his defensive game.

East did a solid job in the stretch run, rebounding hurried misses by the Greyhounds, being strong with the ball, getting fouled and making enough free throws to cruise home.

“I watched a lot of film and these guys were in position to win games last year, but they didn’t finish,” Porter said. “They’ve worked to get mentally tougher. They’re executing. They’re finishing. It was an exciting win.”

It’s a shame the fan base is so limited. East fans would’ve gotten enthused about this one.

East played again without Gavin Sprinkle, who has an ankle injury. He might be able to return next week.

Reactions from the sports world to the death of…