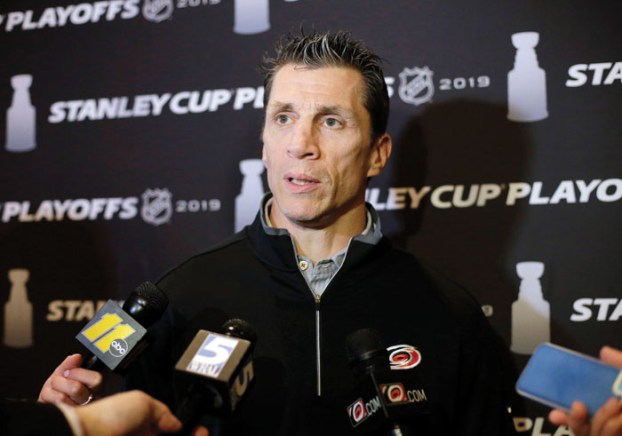 Carolina Hurricanes coach Rod Brind'Amour says, ‘I think we all understood there was a chance that something like this was going to happen.’ (AP File Photo/Steven Senne)

Hurricanes’ season on pause while Caps play on minus four regulars

Rod Brind’Amour lamented Carolina’s season coming to a screeching halt despite doing “a great job” adhering to pandemic protocols. For Peter Laviolette, his Washington Capitals will keep playing for the next week without four prominent players who broke the rules.

Each team is getting punished in a different way after being affected by the virus. The Hurricanes had games postponed through at least Saturday and won’t get to practice in person with a handful of players on the COVID-19 list.

There’s no indication the Capitals are being shut down, though they will have to play the next four games without captain Alex Ovechkin, No. 1 center Evgeny Kuznetsov, top-four defenseman Dmitry Orlov and starting goaltender Ilya Samsonov. “We totally understand why the rules are in place, and there’s no arguing with that,” said Laviolette, who’s in his first season as Washington’s coach. “We knew the rules. We’re not sitting here saying that we were uninformed or we weren’t aware. We need to do a better job.”

The NHL fined the Capitals $100,000 for breaking protocol by having those four players in a hotel room together with none of them wearing a mask.

Carolina has been off since Tuesday, when four players joined captain Jordan Staal on the COVID-19 unavailable list. The Hurricanes have had three games postponed because of their outbreak.

“We’ve done all the protocols — we’ve tried,” Brind’Amour said. “Obviously it didn’t matter, it got into our room.”

Brind’Amour and Carolina general manager Don Waddell didn’t seem to question any player’s judgment amid the team’s pause. Some players are stuck in Nashville while the rest of the Hurricanes are home because of NHL protocols spelling out what to do.

“I think we all understood there was a chance that something like this was going to happen,” Brind’Amour said. “It’s not really about was it going to happen, it’s how do you deal with it. I think that’s really what we’re going to find out.”

Hornets getting Zeller back tonight