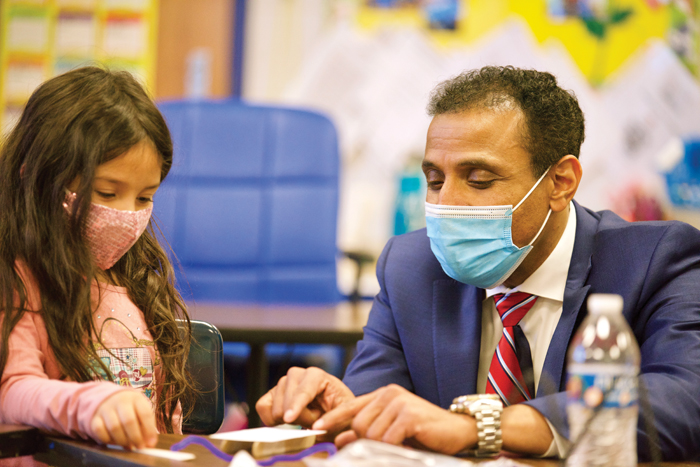 SALISBURY – Tony Watlington spent most of his first week with Rowan-Salisbury Schools exploring the district.

He has been visiting every school and facility in the district, speaking to staff and students as he goes while he learns more about the district. He also met with every school board member individually.

“It’s been action packed and a lot of fun beginning to get to know our community,” Watlington said.

He started Monday, Jan. 11, and was sworn in at that day’s Board of Education meeting with his sons and mentors in attendance. Watlington previously served as chief of schools for Guilford County Schools, which was second-in-command to GCS Superintendent Sharon Contreras.

Watlington says he plans to be in schools often and stay in touch with students and staff as he looks toward a major goal: a new strategic plan for the district. The plan would lay out where the district wants to go in the next few years and how it plans to get there.

Watlington said it would be premature to say he knows what will be included in the plan because he still has more learning about the district, but it will be based on feedback of parents, faculty, staff and students.

“That will take a little time.” Watlington said. “I think we’re doing the right thing to go slow so we can go fast at a later time.”

Watlington says he wants to be in schools so staff know their voices are being heard. He said staff have told him during his district tour they want to stay the course and make renewal a success. Most of the people he’s talked to relayed they like what the district is doing with plan B, keeping students in schools two days a week in two cohorts.

Watlington described wanting to teach students based on their needs and that the district is still working on its directional system for renewal. He expects there will be some good things to share about renewal soon.

He said the district is still working to wrap up some of the critical infrastructure for renewal, including a new assessment system it is developing according to an aggressive timeline.

“You can’t take a system that’s been in place for 150 years and recreated it in 15 months,” Watlington said.

He said the district will carefully watch COVID-19 metrics and staff want to ensure the schools are doing everything they can to keep kid safe in schools.

Watlington has also been exploring the county at large. He began looking at houses last week and hopes to have a new place to live lined up within the coming week so he can move to Rowan County. He he has also been discovering the local food scene in Salisbury. Before the board meeting last week he ate at local barbecue favorite The Smoke Pit.