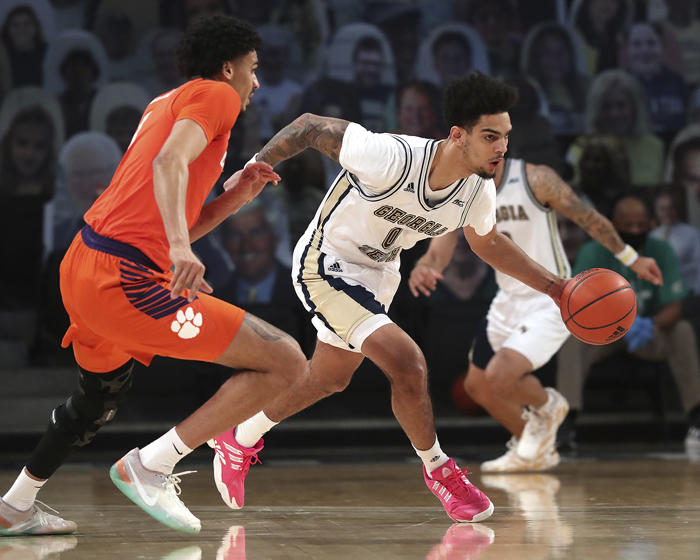 ATLANTA — Georgia Tech returned from a 17-day layoff with one of its most impressive showings of the season, routing No. 20 Clemson 83-65 as three players scored more than 20 points Wednesday night.

Michael Devoe led the way with 22 points, while Moses Wright and Jordan Usher chipped in with 21 apiece.

The Yellow Jackets (7-3, 3-1 Atlantic Coast Conference) built a nine-point halftime lead and pulled away after the break to hand the Tigers their second straight blowout loss.

Coach Josh Pastner was worried that his team might be rusty after having four straight games postponed because of COVID-19 protocols. But the Yellow Jackets picked up where they left off to stretch their winning streak to five in a row, further bolstering their hopes of reaching the NCAA Tournament for the first time since 2010. Clemson, on the other hand, has looked like a different team since going 11 days without a game because of the pandemic.

The Tigers (9-3, 3-3) returned from their unscheduled break last Saturday and were embarrassed at home by Virginia, 85-50.

Now, a second straight game that got out of hand.

Clemson went more than four minutes without scoring to start the second half, allowing Georgia Tech to stretch its lead to 53-35. Aamir Simms scored 19 points to lead the Tigers.

Providence (8-6, 4-4 Big East) won for the first time in four games and avenged a crushing loss to the Bluejays three weeks ago. Creighton (10-4, 6-3) lost its second straight after one of its worst offensive games of the season.  David Duke put the game out of reach with two free throws at the end.

Damien Jefferson scored a career-best 26 points for the Bluejays.

DAVIDSON (AP) — Kellan Grady had 24 points, including seven 3-pointers, and seven rebounds as the Wildcats got past Fordham. Luka Brajkovic added nine points and nine rebounds for Davidson (9-5, 5-2 Atlantic 10 Conference). Chris Austin had 19 points for the Rams (1-6, 1-6), who have now lost four games in a row. Josh Navarro added 14 points and Jalen Cobb had seven assists.

FARMVILLE, Va. (AP) — Justin Hill had a season-high 20 points as Longwood got past High Point.

DeVon Baker had 20 points for the Bulldogs (8-7, 7-3), whose four-game winning streak was broken. UNC-Asheville had defeated Gardner-Webb 79-75 on Tuesday.

Fah’Mir Ali, the Highlanders’ leading scorer coming into the matchup at 11 points per game, shot only 20 percent in the game (1 of 5).

Jordan Whitfield had 20 points for the Fighting Camels (8-9, 4-6). Cedric Henderson Jr. added 12 points. Messiah Thompson had 11 points. The Highlanders improve to 2-0 against the Fighting Camels this season. Radford defeated Campbell 97-91 on Tuesday.