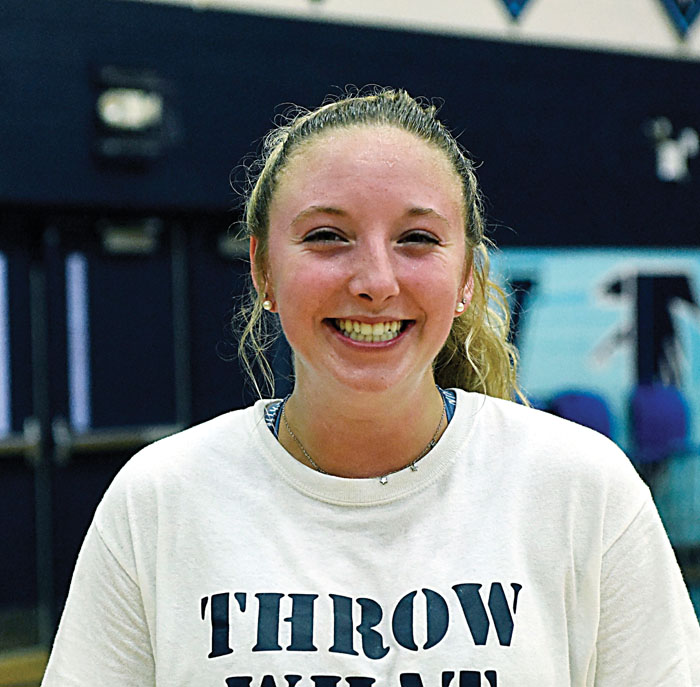 MOUNT ULLA — Girls are being exposed to the exciting sport of volleyball earlier in Rowan County now, but Queens University signee Kaylin “KK” Dowling may have had the youngest start in history.

When she was a baby, her mother, Jan, was coaching the South Rowan girls program, so a bundled-up KK was generally on the South bench.

“I’m basically sleeping through it all, but my mom is coaching and she’s holding me, and then she’s getting up and yelling and everyone is hoping she’s going to be careful,” KK said. “People are hoping she’ll calm down because, well, there’s a baby over there. I’ve heard all the stories.”

KK was a South ball-stacker from the time she could walk. Instead of a tricycle, she took rides on the South ball cart and became a little sister to all the South players. She grew proficient at the sport at an age when most girls don’t know a kill from a dig.

“I was playing travel ball by the time I was 6 or 7,” KK said. “But even before that, I was jumping into South’s jayvee skill drills and playing with those girls.”

KK’s mother was a West Rowan graduate. After 14 years at South Rowan, she made the move to Mount Ulla to bring her tireless brand of energy to a West Rowan program that was experiencing lean seasons. She rejoined the Falcons’ camp in 2015. Superstar Tori Hester came along a year prior to KK, so West had started to win by the time KK arrived as a West freshman in the fall of 2017.

KK was well known around the county by then because of softball. She was the lefty-swinging center fielder for Rowan Little League squads that won the World Series in 2015 and finished second in 2016.

“I really like softball and I’ll be playing my last softball season for West Rowan in May,” KK said. “But volleyball is the sport I’ve loved all my life. I like the faster pace of volleyball, but the biggest thing is that in softball, you make one big mistake and your team probably loses. In volleyball, you constantly make mistakes and everyone makes plenty of mistakes, but you get to go right on to the next play. You’re always going to get that chance to make up for your mistakes.”

KK played a role for the volleyball Falcons as a varsity freshman. She had limited chances to swing for a 20-7 team, but she had 52 aces and 158 digs.

As a junior in 2019, Hester and KK led a 28-1 team that reached the Final Four in 3A. KK was huge in West’s win over North Iredell in the NPC tournament championship match, and the playoff games in the West gym were something to behold. KK stomped around madly after key kills, like she was putting out forest fires. She ignited packed houses with a passion for the game that reminded everyone of her mother. She had 360 kills and 300 digs that season.

Under normal circumstances, West would have had another 20-win volleyball season in 2020, but COVID dominated most high school activities, from the time the Falcons’ promising softball season was short-circuited last March through West’s early exit from the 2020-21 volleyball season with a 9-4 record.

“We lost some close ones to North and South Iredell, but I was proud of the way we played,” KK said. “We were holding our breath all summer wondering, so mostly I’m just thankful that we were able to have a season.”

Dowling would easily have reached career milestones such as 1,000 kills and 1,000 digs with a normal senior season, but what hurt most was not getting to play in front of fans and not going to the playoffs in a year with a reduced field. West had gotten used to being in the playoffs. West went 76-17 in KK’s four seasons.

There was an occasional KK stomp, but nothing like last year when it seemed she might drive a hole in the floor of the gym at any moment.

She says that was by choice. She strived to control her emotions more as a senior, instead of just letting everything go on every swing.

“Tori Hester was the best player in our conference, so not having her, someone everyone looked up to, we knew it would be a very big loss,” KK said. “We had a lot of young players out there this season, a freshman and four sophomores playing a lot, and I knew they’d be looking to me as one of the older players. So I tried hard to be calmer. I tried not to let my emotions get the best of me like they did a few times in 2019. I wanted to stay calm and humble.”

Being coached by her mother, who played at Western Carolina University, was an impactful part of her career. For two emotional individuals, who want to win very badly, they did well with it. They spent a lot of time together at practices and games, made a lot of road trips together in buses and cars.

“Oh, there were some occasional disagreements,” KK said with a laugh. “But we did OK.  When we were at home, she was “Mom,” but when it came to the volleyball court, she was always “Coach.” We were able to balance those two roles. Fortunately, I have a strong work ethic. I think she always pushed me harder than anyone else, but I’m grateful that she did.”

KK could have made D-I rosters, even though she would’ve been an undersized hitter at 5-foot-9.

Division II Queens, in Charlotte, should be an ideal fit for her.

“When I visited Queens, it felt homey in every way, just a perfect atmosphere,” KK said. “I had a Zoom conference with a lot of the girls on the team, and it was like we’d been friends for years.  It’s a good distance away, but not too far. My grandparents have always come to my games, and they’ll still be able to watch me play. That was important.”

KK was the county’s bounciest, most athletic and most explosive player this season. She brought at least as much power as anyone. She has a terrific all-round game and is as good on the back row as she is on the front. She’s also a lefty swinger, which has its advantages.

“Lefties just swing different, and I can see that myself whenever I play against a left-hander,” KK said. “It’s harder to line up the blocks against a lefty. Sometimes they think they have me blocked, but I can still see a hole.”

KK is playing currently with the Twin City Volleyball Academy.

She’s always loved being a Falcon, so she’s hoping for a post-pandemic signing party at the school.

She’s looking forward to that final softball season in the outfield, playing for Coach Jimmy Greene.

But volleyball is the sport that’s in her blood. It always has been.

“I’ll major in business or marketing at Queens and I have no plans to be a teacher, but I’m not ruling out being a volleyball coach some day,” KK said. “It’s been volleyball my whole life.”