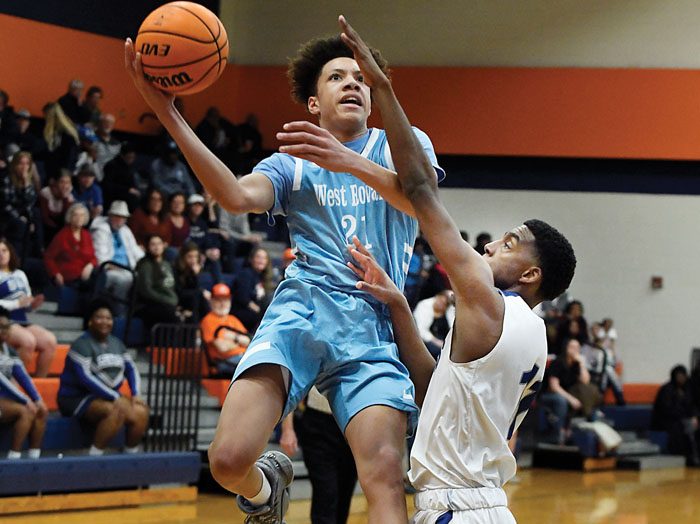 West's Macari Allison will be a key contributor this season. File photo by Wayne Hinshaw, for the Salisbury Post

Twelfth in a series of reports on local basketball teams.

Playoffs: Lost to Parkland first round

MOUNT ULLA — This isn’t one of the all-time West Rowan boys teams.

But it’s a very good one, certainly the best one in a while. The Falcons are off to a 5-0 start for the first time since brothers K.J. and Keshun Sherrill were doing their thing together in Mount Ulla in 2009-10.

So coach Mike Gurley is smiling, even with a mask on. He’s talking and cracking jokes, even more than usual.

But he acknowledges the seriousness of playing through a pandemic.

“It’s a different world now,” Gurley said. “Playing with 25 fans is different and it creates a really strange basketball environment. I wish we had a bubble we could go to, to make sure we can finish this season. It may be a very tough season with the COVID issues. There may be a lot to overcome, but we’ll do our best to get to where we want to go.”

Given the state of the opposition in the North Piedmont Conference in this  dramatically condensed season, a league championship appears to be the minimum goal for the Falcons. An undefeated regular season wouldn’t be a shock, although the Falcons may be challenged at Statesville, where they have had their stumbles, and at Olin, where North Iredell is as good as it’s been in a long time.

West is actually ranked third in 3A by MaxPreps after Tuesday’s games, which seems crazy for a team that was 15-10 in 2019-20 and lost some important pieces.

But it’s true that Gurley, who has logged more than 500 wins in a Hall of Fame career, wouldn’t swap teams with many people.

“I really do like this team,” Gurley said “I like the way this team will move the ball to find the open man.”

The key to this operation is point guard Jalen Moss, who was the Rowan County Player of the Year as a junior. Moss averaged 17 points per game. He had 28 and 24 against Statesville. He had 35 against Carson. He’s not an amazing shooter, but he can get to the rim and he can find the open shooter after he beats his man and forces others to help.

“He’s just really quick,” Gurley said. “He’s quick on top of quick and with some extra quick thrown in there. He’s as fast as anyone. He feels the game. He makes the right play. He makes us tough to pressure. He can get it and go.”

Moss is driving and dishing to two seniors who are among the county’s best 3-point shooters.

Mauldin is 6-foot-2 and gets some rebounds. Graham is 6-foot-1 and has some bounce in his game as well as the long-range stroke. Both defend well in the team concept, and Graham is fast enough to get some steals and easy points.

Then you’ve got returner Macari Allison, who has grown to 6-foot-4 and improved quite a bit. Allison topped 20 points four times in 2019-20 and averaged 10.9 points. That  figure is expected to increase. Because of his height and length, he’s as good a college prospect as anyone.

“Macari is athletic, he’s got long arms, and he can shoot it,” Gurley said. “Macari will have a big season. We’ve got really talented wing players. Shooters like that, my job is to let them play.”

Zeek Biggers, the 6-foot-6, 330-pound defensive lineman who signed with Georgia Tech, will be important because the Falcons don’t have many posts. Biggers isn’t likely to be a big scorer, but he gives West a lot of presence and a lot of rebounds.

West has a talented freshman guard in Jayden “Juke” Harris, who played for North Hills in 2019-20 as an eighth-grader.

The 6-foot-2 Harris shoots well from outside and makes instinctive passes. For his age, he’s pretty advanced. He’s in a sixth-man role only because West is loaded with guards and wings.

West isn’t deep, but Gurley is confident he has reserves who can help.

Sam Wood, a tall shooter, has experience. So does Justin Currie.

Noah Loeblein, the football quarterback, plays as hard as anyone.

Josh Noble, an imposing football lineman, will get major minutes spelling Biggers in the post. He’s a blue-collar guy who relishes doing the dirty work.

Lavonne Jacobs will probably play with the jayvees, but he has a future. So does 6-foot-8 Bryson Cowan.

“He’s a big child,” Gurley said. “We don’t mind having some height, and he’s developing.”

Gurley has plenty of firepower as long as everyone is healthy.

“The worry is what happens if you lose two guys for 10 days to a quarantine?” Gurley said. “What happens if the team can’t play two or three games. Things might blow up on a daily basis, and we have to be able to make adjustments.”

Coaches have enjoying saying for decades that a season is a marathon, not a sprint, but this one definitely is a sprint. The regular season ends Feb. 19.

One slip can change a season. In the NPC, only the league champion is certain of a playoff berth. There are only a handful of wild-card berths available.

“It’s not going to be an easy season for anyone,” Gurley said. “But we’re excited that we’re getting to play it.”