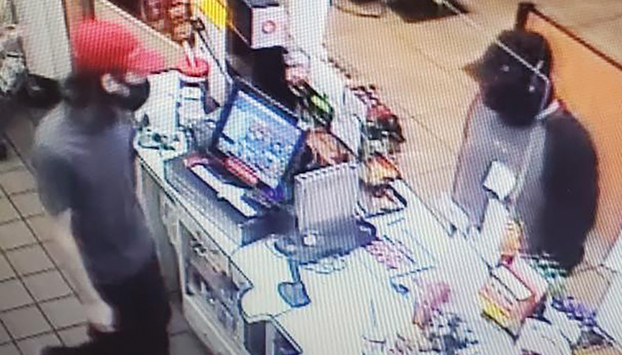 In this image, provided by Salisbury Police, a man waits at the counterof the Sheetz gas station on Jake Alexander Boulevard.

SALISBURY — For the third time in as many days, a man robbed a gas station by asking for Newport cigarettes and showing a gun, police say.

In an incident early Thursday, the man, who has not been identified, asked for Newport cigarettes at the Sheetz gas station on Jake Alexander Boulevard. In an identical manner to the other robberies, he displayed a black handgun and demanded money. Salisbury Police spokesman Lt. Lee Walker said the bandit was able to make off with the contents of one cash register.

Walker said convenience stores have been provided with a crime intelligence brochure about the incidents. If a convenience store clerk is the victim of a robbery, he said, the person should note the direction the man travels and a description of his vehicle and immediately call police.

Walker said police suspect the man in the Sheetz incident was driving a F-150-style truck that’s been lifted.

Police say the man is suspected in five total gas station robberies that have occurred since Jan. 7.

People with information about the crime can contact Salisbury Police at 704-638-5333 or call Salisbury-Rowan Crime Stoppers at 1-866-639-5245. Tips may be submitted online at tips.salisburyrowancrimestoppers.org, via Facebook private message or via the Nixle app by texting 888777 with the words: TIP MYSALISBURY (your tip information). People should call 911 if they see the man and avoid approaching.