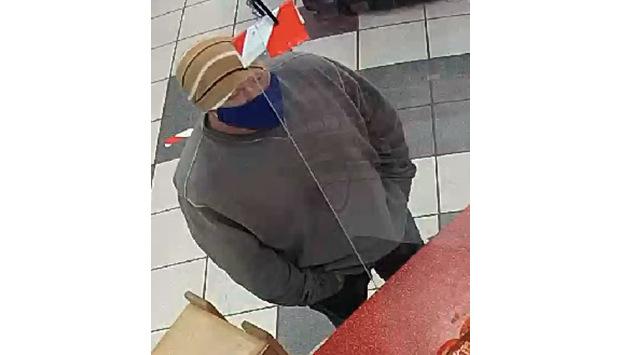 Photo submitted - This image shows a suspect in a robbery at a Granite Quarry Circle K convenience store.

GRANITE QUARRY — Police are investigating whether an armed robbery early Wednesday may be connected to another one a day earlier in Salisbury.

The Granite Quarry robbery occurred at 12:10 a.m. on Wednesday at the Circle K at 217 South Salisbury Ave. There, a white male was wearing a gray sweatshirt, tan knit cap with stripes, dark pants, black tennis shoes, a blue mask and glasses when he entered the store.

After he displayed the gun, the clerk emptied the register and the suspect left on foot.

Because of the way the man was dressed, a more detailed description of his appearance was not available.

In Salisbury, a blue-masked bandit arrived at the 7-Eleven convenience store at 1605 East Innes Street around midnight on Tuesday and was allowed to the front of the line by a couple who was already waiting. The thief was wearing a black sweatshirt, dark jeans and a knit cap that pictured a bald eagle and an American flag. After displaying a gun, he made off with about $150.

Granite Quarry-Faith Joint Police Authority Chief Mark Cook said his department has been in communication with Salisbury because of similarities in the incidents. No further information was available.

People with information about the Salisbury incident can contact Salisbury Police at 704-638-5333.

For either case, tipsters can contact Salisbury-Rowan Crime Stoppers at 1-866-639-5245. Tips may be submitted online at tips.salisburyrowancrimestoppers.org.