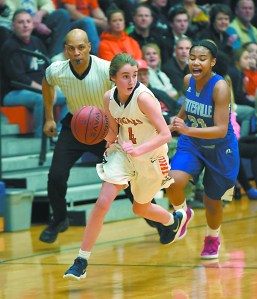 Carson’s Ellie Wilhelm vs. Statesville earlier in her career. Photo by Wayne Hinshaw, for the Salisbury Post

STATESVILLE — Carson’s girls basketball team is ranked eighth in 3A by MaxPreps, and that’s probably conservative.

Carson has scored at least 60 points in every outing and hasn’t allowed anyone to score 30 yet.

The Cougars continued to dominate on Tuesday with a 62-28 North Piedmont Conference road win at Statesville, which is normally a difficult place to play.

“Our press generated turnovers and allowed us to get off to a good start,” Carson coach Brooke Stouder said. “We mixed up our defenses and we ran the floor well.”

Colbie Perry got the Cougars started with two 3-pointers in the first quarter. Perry boosted her career scoring total to 920 points.

Ellie Wilhelm got hot in the third quarter. She had 11 in the quarter and finished with a game-high 20 on efficient 8-for-12 shooting.

“Ellie’s teammates did a good job of continuing to get the ball to her,” Stouder said.

“Lani did a great job of getting the ball up the court quickly,” Stouder said.

Carson’s next scheduled game is at West Rowan on Friday, With both teams undefeated that would have meant a packed house in Mount Ulla under normal circumstances.

Hoops roundup: Georgia Tech back in action tonight after…