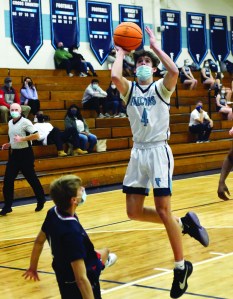 MOUNT ULLA — West Rowan’s boys basketball team is 5-0 for the first time since the 2009-10 season, the one season that coach Mike Gurley had brothers K.J. and Keshun Sherrill in the lineup together.

West, which has won three North Piedmont Conference games,  is ranked third in 3A by MaxPreps and an undefeated regular campaign in this drastically shortened COVID season is a possibility.

Win No.  5 for the current group came on Tuesday at home. West withstood a challenge from a North Iredell team that may provide as tough a test for the Falcons as anyone in the North Piedmont Conference.

West broke open a tight game with a 24-11 third quarter and then held off a spirited fourth-quarter run by the visitors. The final was 67-59.

West started fast and led 10-2, but North Iredell wiped out that lead. The Falcons led 25-23 at halftime.

It was 25-all when West point guard Jalen Moss ducked into the paint for a game-changing, three-point play.

That started a West run. More energy was provided when Zeek Biggers, West’s 6-foot-6, 330-pound center, went airborne for a tip-in for 35-27 lead. With time running out in the third quarter, Braden Graham grabbed an offensive rebound and made a contested fallaway jumper for a 49-34 lead.

West relaxed a bit too soon, and North Iredell fought to the end for the single-digit final.

In the jayvee boys game, Levon Jacobs scored 22 to lead the Falcons to a 55-40 victory.

The varsity girls game was postponed.