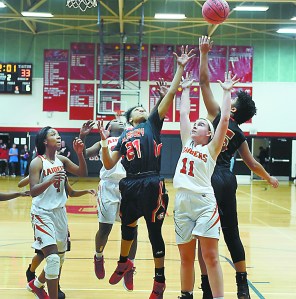 South Rowan’s Paige Chabala (11) in action earlier in her career. Photo by Wayne Hinshaw, for the Salisbury Post

Allen viewed the Central Carolina Conference setback at Ledford as a defensive battle, rather than as an offensive struggle.

South scored only 10 points in the first half, but stayed in the game all the way by slowing down the Panthers.

“I’m very proud of how much improvement we’re showing,” Allen said. “We played great defense against a good team. Now we just have to take care of the ball more.”

Ledford got 11 each from Sarah Ledbetter and Sophie Conger.

But the Raiders move forward knowing they have a chance to be more competitive in the CCC than was expected prior to the season.