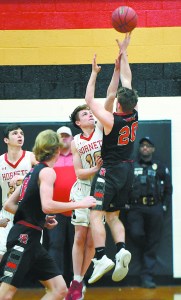 South Rowan’s Barrett Thompson in action against Salisbury. Photo by Wayne Hinshaw, for the Salisbury Post

WALLBURG — There are nights when you have a chance to win, but there other nights where it’s mostly a try-to-get-better learning experience.

South Rowan’s boys basketball team faced a tall task in trying to extend its winning streak to three in a row on Tuesday.

It didn’t happen. South was overpowered by Ledford 75-44 on the road.

The Panthers (4-0, 2-0), along with North Davidson, are considered the teams to beat in the Central Carolina Conference.

Ledford is ranked third in 2A by MaxPreps.

The Ledford-North Davidson matchup is scheduled for Feb. 12.

“Hats of to Ledford, they’re a really good basketball team,” South head coach Daniel Blevins said. “We lost some of our offensive consistency tonight and didn’t finish plays that we needed to finish to compete with a good team.  But there were some positives we can build on, especially in the first half.”

“We have some things defensively that we really need to shore up, and we’ll be focusing on them,” Blevins said.