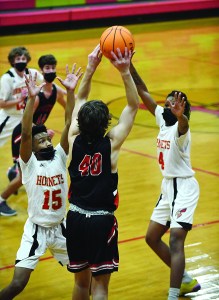 Salisury’s Jalen Chunn and Joseph Witherspoon defend in the game against Chatham Central.  Photo by Wayne Hinshaw, for the Salisbury Post

“We’re starting to really play,” Salisbury head coach Bryan Withers said. “I’ve never been disappointed with our effort, but now we’re starting to get it. We’re playing better defense and we’re learning to play at a pace that’s right for us. We’re making fewer turnovers.”

Salisbury had a two-week COVID pause during preseason preparations. After that, they were basically starting over when the season got started and that was probably a contributing factor in an 0-3 start. They also played without their best 3-point shooter, Cameron Stout, in an overtime loss and a double-overtime loss.

Salisbury (2-3, 2-0) focused its defensive effort Tuesday on Green Dragon senior Macon Stovall, who had 37 points in a win against East Davidson. Stovall only got eight against the Hornets and was 2-for-19 from the field.

The “guys” did not include guard Javon Smith, who sat out another game with injury. Withers said he warmed up without issues, but the Hornets wanted to make sure he was fully healthy and they didn’t figure to need him on Tuesday. He’ll probably be back for the Lexington game on Friday.

West Davidson (2-2, 0-2) had few answers for Salisbury’s Jalon Walker, who had nine points, 10 rebounds and four blocks in just 16 minutes. Nate Brown had 13 points and nine rebounds.  Stout made three 3-pointers and scored 12. Deuce Walker made both of his shots and made three steals. Joseph Witherspoon, Mike Geter and Stout also had three steals.